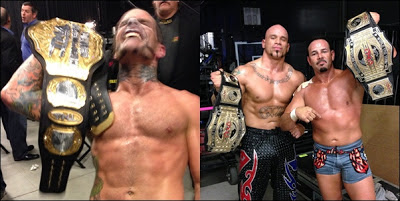 Two weeks ago I stated on my YouTube page that TNA’s Bound for Glory was going to make or break for TNA. I think this PPV gave TNA some momentum. From opening to finish the show was really excellent to watch. I may have not agreed with all the decisions and outcomes of the matches but it was a great show nonetheless. The first match was RVD vs. Zema Ion for the X Division Championship. Ion has made a great X Division champion throughout the summer and into the fall. This match was put together at the last minute so it really disappointed me to see RVD win the title. The match should have had some build up and maybe had Zema win once or twice before RVD finally went over. I think this hurts Zema Ion’s momentum and growth because they are suppose to be pushing young guys and what better way to get a push then going over on Rob Van Dam. It was a really good opening match but in my heart I think it was the wrong result.

Samoa Joe defended the TV title against Magnus in a really great wrestling match that had an old school Ring of Honor feel to it because of how Joe performed. I am glad that Samoa Joe won the match and is finally being used again in the right way. Joe has been misused for the last two years and I think him having the TV title is a very good thing for TNA but I do think we will see some good things from Magnus headed into 2013.

The year long feud between Bobby Roode and James Storm finally came full circle. From Team Canada to AMW to Beer Money to World Titles, both of these men have done it all in TNA. This match was NO DQ and it sure was a bloodbath. They had everything from thumbtacks, chairs, frying pans, kendo sticks, and cheese graters. In the end James Storm nailed a vicious superkick on Roode which saw Roode land into the thumbtacks for the second time in the match. It was a great match that ended year long rivalry.

Joey Ryan was the first ever live TNA Gut Check participant and was the first to get denied a TNA contract. Ever since his denial he has been showing up to Impact and getting into Al Snow’s face. He faced Al Snow for a permanent TNA contract and he won the match with some help a returning Matt Morgan. Al Snow looked good for not wrestling in a long time but I will be curious to see how Joey Ryan and Matt Morgan play out on TV.

Between WWE and TNA tag team wrestling is getting put back on map. Tonight was a prime example of in the match that feature Chavo Guerrero/Hernandez vs Styles/Angle vs Daniels/Kazarian. All three teams have looked really good but from a sentimental standpoint I was rooting for Chavo and Hernandez because I truly feel Chavo never fully got the recognition he deserved in WWE, even after Eddie passed away. Chavo being teamed with Hernandez was a great thing and I think they will make great TNA Tag Team champions.

The other title change I did not care for is Tara beating Miss Tessmacher. I understand that it’s a good storyline right now with her dating Jesse from Big Brother but Tess has been a great Knockouts Champions and needs to start taking on other competitors like ODB, Mike James and Gail Kim. I understand the Knockouts division is kind of weak right now but bring back a few of the old knockouts or something. I will be very curious to see how this Tara storyline plays out.
Aces n Eights has been an intriguing storyline the last few months. It’s been really exciting to watch and has keep a lot of viewers in suspense. They took on the team of Bully Ray and Sting in a NODQ match which in the end worked against TNA. Aces n Eights won the match but after the match Hogan came down and cleaned house. Hogan, Sting and Ray had one of the members cornered and unmasked him. To my shock and everyone else’s the masked man was Devon. Bully Ray and the others looked stunned and confused. This has to be one of the best swerves yet because everyone thought Devon was done with TNA and headed back to WWE with Ray. Guess what? This is only the beginning. Other rumored names for this group include Jay Bradley, Luke Gallows, Mike Knox and a lot of people are suggesting that the mastermind is Jeff Jarrett. I guess will have to see what happens on TV and gets revealed as the members of Aces n Eights.
The main event was for the World Heavyweight Title with champion Austin Aries defending against Jeff Hardy. I have always been a Jeff Hardy fan but it took me a long time to get over what happen at Victory Road last year when he threw the matchn against Sting. He came back, got sober and got his last shot at redemption. Austin Aries is a great wrestler and a good champion but I honestly think he was TNA’s answer  to WWE having CM Punk and Daniel Bryan as their champions. It is no secret that Hulk Hogan did not want Aries as World Champion and in the end he got his wish. Jeff Hardy is the new TNA World Heavyweight Champion in what happened to be a 5 star match.
The whole show was really good and fun to watch. I was shocked by Matt Morgan and Devon, was blown away by Roode and Storm and really happy that Jeff Hardy got his redemption. I thought Bound for Glory gave TNA a lot of momentum and hopefully the can continue to use that momentum.
TNA
Please Share This