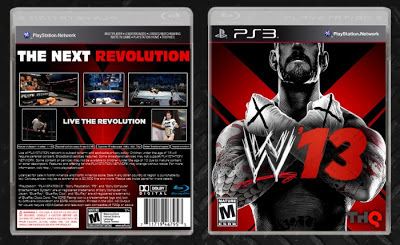 It’s been a year that I talked about WWE 12 and how great it was and a year later I am back with WWE 13. I didn’t want to write a review until I have fully experience the game. I played for a lengthy time this week from Attitude mode to Universe Mode and all the things you could create.

The attitude mode has many different stories from major moments in the Attitude Era. They have stories from Wrestlemania 14, and 15. They also have classic matches like Mankind and The Undertaker, or you can relive the very first episode of Smackdown and recreate the match between The Rock and Austin vs. The Undertaker and Triple. Due to to the Attitude Era mode there different versions of WWE stars. For example there are 3 versions of Triple H, 2 of The Rock, 2 of Edge, 2 of Christian and more. My personal favorite is the Basic Thuganomics version of John Cena. They also have the 3 Faces of Foley in the game. There are so many moments you can get into that will have you playing the Attitude Era.

I love creating stars, creating arenas and creating moves. All of the create features are so in-depth this year. I love the character I created for myself along with the move list. The create modes really allow you to change the whole landscape of WWE Universe Mode. In the Universe Mode you can create your own brand and show with your own arena. You can create your own pay-per-views. My friend and I created a show and brand called Saturday’s Nightmare with our arena being called the Death Chamber. We also could edit the rosters and put whoever we wanted to on our brand. Let’s just in our brand their is a lot blood, hardcore and chaos every match that’s played. The Universe mode got ten times better due to the create modes being much more in-depth then they ever have been.

The gameplay is much more complex and presents new challenges. There are more reversals, a larger set of moves to use and the different match types. You can do a quick match, normal match or an epic match. The level of these matches determine how long the match goes and how hard you have to work to get the victory.  I also love that they brought back the King of the Ring, the I Quit, Last Man Standing and Special Guest Referee matches. Those were four matches that were lacking the last few years.

This has game has to be hands down the greatest wrestling game ever made. I believe it’s going to be very hard to top this game for a long time. This game has so much to offer and so many different match ups that you could never see in the WWE. If you are a WWE fan with an Xbox, or PS3 this is the game for you. It has past and present and all you could ever want in a wrestling. Go out and join the revolution today and pick this game up. You will lose yourself for hours enjoy the depth of WWE 13. If you don’t pick up this game I just got two words for you….missing out!