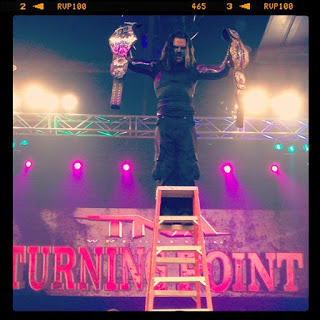 So tonight was TNA Turning Point and it was definitely a fun show to watch. The opening match was Samoa Joe versus Magnus for the Television Championship and it was a good match for an opener. Both have been having great matches and this one wasn’t a let down by any means. Samoa Joe retains the title and he is finally getting momentum on his side once again.

The inter-gender tag match with ODB and EY going against Tara ad Jesse was a lot of fun and had a lot comedic spots. Both teams are what I consider the odd couples of TNA but the match was fun to watch.

The second title match was the RVD defending the X Division title against Joey Ryan. I honestly don’t know where they are going with either wrestler but one RVD does not need the X Division Championship and Joey Ryan’s character is just flat out stupid. The only reason people are talking him serious now is because Matt Morgan is his bodyguard. Matt Morgan is more over then Joey Ryan is but I am not creative so I can’t make that call.  RVD retains and Joey Ryan’s direction is totally unknown.

Joseph Park the lawyer took on the newest member of Aces N Eights Doc (formerly known as Luke Gallows). I love Joseph Park when he fights because he always takes a good beating but when he start bleeding he gives a good beating. Doc ended up winning the match and tried beating Park down but Bully Ray made the save. I like the Park character but Abyss seriously needs to resurface back on TV. I kind of noticed a correlation because when Kane went under the mask in WWE again, the Abyss character disappeared from TV. Only time will tell when Park is no more and Abyss returns.

Hernandez and Chavo Guerrero had their first title defense against Daniels and Kazarian who in my opinion have been the best heels in the wrestling world this year. It was a very competitive match between the two teams but at the end of the match the tag champs retained their titles. I really like that Hernandez is getting a push again and also love that they haven’t broken up the team of Daniels and Kazarian. They are a good antagonist team. I hope they stay together for a long time and keep their heel run going.

The number one contendership for the TNA Heavyweight title was decided in a triple threat match between AJ Styles, Bobby Roode, and James Storm. The stipulation of this match was whoever got pinned would not receive a title shot again until next year’s Bound for Glory. A lot was on the line and it was so much fun to watch these three competitors go at it in the ring. The end result of it all was James Storm pinning AJ Styles for a chance to wrestle for the TNA Championship next month. As for Styles it’s going to be a long year for him and I will be curious to see how they use him now. I personally see a heel turn but we shall see.

Kurt Angle took on Devon in a decent match even though I think it was rushed due to time constraints. Kurt Angle made Devon tap and escaped from an Ace and Eights beatdown. I was really disappointed that another member of the group wasn’t unmasked. That would have made for more of an impact leading into Thursday.

The Main Event of the evening was the Ladder Match for the TNA World Championship between Jeff Hardy and challenger Austin Aries. This was a great intense battle for the title. Both men took a lot of hard falls off the ladder and will probably be feeling the pain for a few days. I honestly think this is a serious match of the year candidate. Jeff Hardy retains the title and does it was a sick Twist of Fate which was one of the most incredible thing’s I have ever seen.

The show was good and solid from top to bottom. It wasn’t spectacular but it wasn’t horrible either. TNA has been doing really good TV and pay-per-views even if the numbers don’t show it. I’d give this show 7.5 out of 10. The next PPV is December 9th which is called Final Resolution. 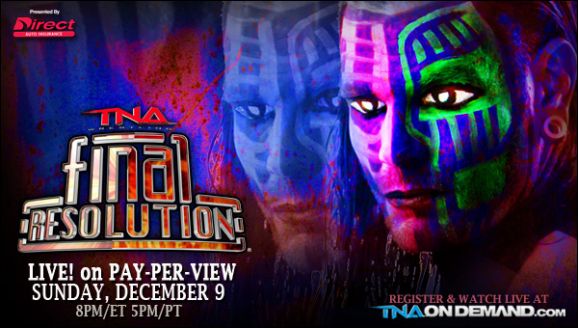