Tonight was TNA’S final PPV of the year which just happens to be called Final Resolution. The night started off  with James Storm looking for a fight with Bobby Roode. Well James Storm did not get Bobby Roode but he did get Kazarian. He and Kaz had a great opening match and it kind picks up the feuding that was going on this past Thursday on Impact. Storm gets the win and keeps up with getting the momentum back on track.

Next up was the X Division Title match between Kenny King and RVD. I am glad RVD got the title but he should have dropped it to King and put a younger guy over. Kenny King had a lot of momentum after he jumped ship from ROH to TNA. The match was good but the ending was horrible and had a some botches. Like I said I have nothing but respect and admiration for RVD but he’s getting up there and needs to start putting over younger talent. That’s one problem I have with WWE that TNA should take advantage of. Put over younger talent and help create superstars. It seems like wrestling in general lacks that concept these days.

Another title match was for the TNA Tag Team Titles was with challangers Joey Ryan and Matt Morgan going against the champs Hernandez and Chavo Guerrero. I absolutely hate Joey Ryan and hate everything his character is. There is nothing special about this guy. Now Matt Morgan on the other hand is headed in the right direction. I like that Hogan in mentoring him and he’s on track to become the star he should have been all along. If Morgan can go solo and start doing his own thing I think he will become a huger success this time around in TNA. With all that being said, the champs retain and Morgan is looking like more of a monster each time he goes out there.

Austin Aries and Bully Ray had a classic tonight and showed why they are two of the top stars in the company. They had a great match with a great story to it. Brooke Hogan got involved with Hulk eventually getting her away from ringside. That minor distraction cause Bully Ray the match and Austin Aries continues his reign of terror against Ray and the Hogans. I think Aries, Roode and Daniels are the three top heels in the company right now. Hell they might be the best in the wrestling world.. You name three better heels out there and I might listen. I am sure the feuding with Ray, Aries and Hulk is far from over.
I know at times I am very hard on the Diva’s of the WWE but it’s because TNA’s Knockout Division is better in every way possible. Tonight was one of the best TNA Knockouts Title matches I’ve seen in a long time. Tara and Mickie James tore the house down. For the first time this year I actually got into a match female match. I know damn well these girls can just be as athletic as the men and I am glad TNA allows theirs to be. With some help from her boyfriend Jesse Tara retained her title and continues her reign of dominance over the Knockouts Division.

The war with Aces n Eights turned another chapter tonight as they took on Wes Brisco, Garrett Bischoff, Samoa Joe and Kurt Angle. I loved that two young guys got to be showcased with two legends in this match. That’s what I am talking about when I say creating and making stars. Wes Brisco is a star in the making and he will have a big year in 2013. Kurt Angle got the win for his team by submission.

The “final match” between AJ Styles and Christopher Daniels was indeed a classic. I put at number 2 behind Aries and Ray for the night. Both men know each other so well and this was roughly their 116th match against each other. It was back and forth with a bloody AJ giving it all he had. In the end, the conceited Daniels beat AJ with his own move, the Styles Clash. I have a feeling this isn’t the last match they have had in TNA. I think at Bound for Glory next year Christopher Daniels could be TNA World Champion and AJ Styles will be the challenger after winning the Bound for Glory Series. I have a feeling that it might be a possible direction they could go just so AJ can have his retribution. Regardless of what happens AJ Styles still has a lot to give and will continue to be a mainstay in TNA Wrestling.
The Main Event of the evening was Bobby Roode challenging Jeff Hardy for the TNA World Title. This was a great back and forth match with Hardy showing the effects from him being attacked on Thursday. Hardy has had three great solid main events in a row and is proving why he deserves the gold despite what other people say about his past. At the end of the match I thought Aces N Eights was going to cost Hardy the title but it led to Roode being distracted and losing. After the match the gang beat up both competitors and the show ended with the gang standing tall.
The show was definitely a good way to end the year in TNA Wrestling. The one thing I am getting a little bit frustrated with is that more members aren’t being revealed. The best way to keep people interested in this storyline is to reveal guys one at a time and the by the time you get to Lockdown in March the only left that needs to be revealed is the leader. That’s my only complaint about the show because other then that it was a good all around pay-per-view. I would give it an 8 out of 10.  The next time TNA is on pay-per-view is January 13th 2013 at Genesis. 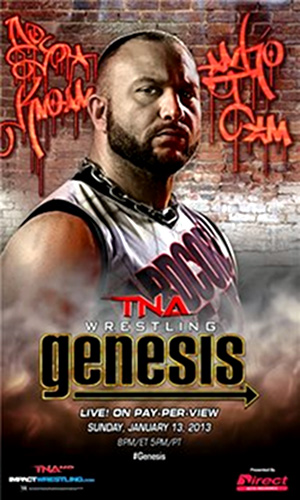