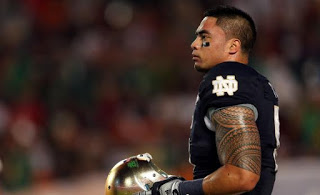 As we all know by now the tragedy of Manti Te’o having his girlfriend die on the same day as his Grandmother did turns out to be hoax. There are many that believe he Te’o had everything to do with this hoax and others think he was part of a vicious prank. It doesn’t matter whether he was apart of this or not. Te’o should have had common sense. I am going to give you some advice from my own life for Te’o and for others that might be in the same position in the future.

I have been with a very wonderful woman since August 2011. We started talking in the early part of 2010 and did not meet until April 2011 at Buffalo Wild Wings for Wrestlemania 27.  I met her on a dating website called Plenty of Fish. Even after I met her I made sure she was legit and it was a great from there. I knew I liked her so I continued talking to her for four more months until we made our relationship official and public. The point I am trying to make here is that if you’re going to go public about a relationship you should probably meet the person and go on a few dates first. If Te’o is a part of this hoax then it’s probably one of the lowest things to get attention that I’ve ever seen. If he is the victim of a horrible prank then I think it’s a crappy thing to do to someone just because they are superstar and has the potential to become a major player in the NFL.

For anyone who reads this who is looking to date or into online do some research, go out and meet the person before you go public and get attached. Finally, to Manti Te’o if you were going to have a make believe girlfriend and had her die in an accident you probably should have followed this: