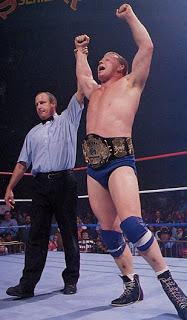 When thinking about the WWE Hall of Fame and who is in it, the first thing you think reading this headline, is it’s about time. Bob Backlund was the face of WWE long before Hulkamania started. He was trained about the late great Eddie Sharkey. Before his arrival in the WWE he was an amateur wrestler at North Dakota State University. He was very successful    in both high school and college. He made his pro wrestling debut in 1973 and arrived in WWE in 1977. He competed with the likes of Superstar Billy Graham, Antonio Inoki, Greg Valentine, Harley Race, Peter Miavia and many others. His reign as WWE Champion started on February 20, 1978 and ended on December 26, 1983. Shortly there after he disappeared from WWE for about 10 years.

He returned at the Royal Rumble in 1993 and lasted 61 minutes a record that stood for over 11 years. He lost to Razor Ramon at Wrestlemania 9 but he began another rise to prominance in mid 1994 when became a heel and started snapping on such superstars as Bret Hart, 123 Kid, and even his former manger Arnold Skaaland. At Survivor Series in 1994 he defeated Bret Hart for his 2nd WWE Championship in a Towel Match.

Even though his 2nd reign ended in three days at the hands of Kevin Nash, it was great to see him be handed the torch and pass the torch on in a wonderful manner. Backlund was also a tag team champion with Pedro Morales in his time WWE. After his loss he then made brief appearances on WWE programming with the latest being at Raw 1000 when he joined forces with other legends to beat up on Heath Slater.

Mr. Backlund was known as a volatile, crazy man with a love for his country. He even ran for congress at one point as well as being MTV’s Singled Out. Bob Backlund brought a unique amateur wrestling style to the world of pro wrestling. He had a different kind of toughness that really can’t be described because when you see him he isn’t big or muscular. The one thing he had was outsmarting, and out thinking his opponents with his style.

I am happy to see that Mr. Bob Backlund, master of the Crossface Chickenwing is now a member of the WWE Hall of Fame. It is long overdue and well deserved. Congratulations to one of the greatest wrestlers in the history of the squared circle.