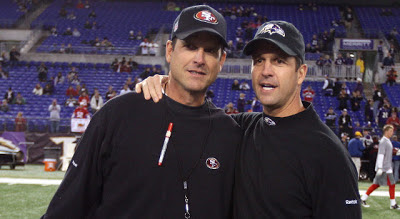 When people talk about Super Bowl 47 they won’t just be talking about the Ray Lewis final game, they will be talking about John Harbaugh vs. Jim Harbaugh and how the for the first time in history two brothers will be coaching against each in the Super Bowl. Let’s take a look at the list of the most notable set of brothers who have competed or coached in the in same sports.
NFL
Manning Brothers- Peyton and Eli
Barber Brother- Tiki and Ronde
Davis Brothers- Vernon and and Vonte
Dyson Brothers- Kevin and Andre
Pouncey Brothrs- Mike and Maurkice
Sharpe Brothers- Shannon and Sterling
NBA
Barry Brothers- Jon, Brent, and Drew

Lopez Brothers- Brook and Robin
MLB
Alomar Brothers- Roberto and Sandy Jr.
Duncan Brothers- Chris and Shelly
Boone Brothers- Aaron and Brett
Maddux Brothers- Greg and Mike
Molina Brothers- Bengie, Jose and Yadier
Upton Brothers- B.J. and Justin
Those are just to name a few in each of the big three sports. There are thousands of brothers who have played in the same sports. Even in NASCAR you have the Busch brother, Wallace Brothers, Sadler Brothers, and Burton Brothers. In pro wrestling and MMA you have a lot of brothers who compete in the same line of work. Super Bowl 47 brings all these brothers into the spotlight. I think this will carry into other sports when brother coach against each other and play against each other. Sometimes the media only focuses on family member but now this will force the sports media to focus on all family members.
Jim and John may love each, care about each other and all that but on February 3rd each man is competing to see whose team is the best. It was and is that way with all the sets of brothers I listed above. Super Bowl 47 won’t be about brotherly love, it will be about bragging rights within the family. Tune in to find out which Harbaugh can say they have the better team.
Please Share This