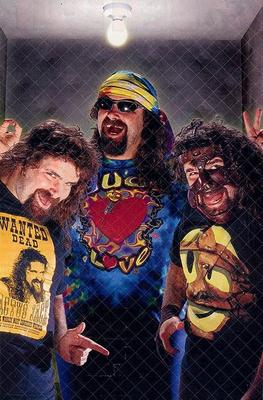 It’s that time of year again where WWE announces their Hall of Fame class in which the ceremony will take place the night before Wrestlemania. People love that I cover the WWE Hall of Fame and others don’t but how can you not like this guy? Mick Foley was trained by Dominic DeNucci and made his debut on June 24th, 1986. His character was Cactus Jack and early on he had amazing matches with Eddie Gilbert, Mil Mascaras, and the British Bulldogs.

He made his full time debut with WCW in the fall of 1991 as a heel when he attacked Sting. During his time in WCW he feuded with Sting, Paul Orndorff, and Vader. He won the WCW Tag Team Championship once in his time there with partner Kevin Sullivan. In 1994, Foley was let go by WCW due to a promo he cut in ECW where he spat on the WCW tag title belt and thew it down.

Over the next two years he would spend time in ECW, Smokey Mountain Wrestling and in Japan. In his early days with ECW he won the tag titles with Mikey Whipwreck on two separate occassions.  When he competed in singles action he feuded with Sabu, Sandman, Tommy Dreamer and Terry Funk. His feud with Terry Funk also occurred across the globe in IWA Japan where took part in the King of the Death Match.  In that tournament he defeated Terry Gordy, Shoji Nakamaki, and Terry Funk. He also appeared for FMW on multiple occassions.

It was in 1996 that he finally made it to the big show as people call it as he Mick Foley debuted on WWE Raw the night after Wrestlemania 12. Foley was under a new character with a mask called Mankind. His first big two feuds in WWE were with Shawn Michaels and The Undertaker. He had The Undertaker’s number throughout most of 1996 even managing to get Paul Bearer as his manager. By mid 1997, Mankind started to have a lighter side to him and the Foley debuted as Dude Love and made a return as Cactus Jack. Most of 1997 was spent feuding with Triple H and The Hart Foundation.

At Royal Rumble 1998, he competed in the match three times with all three Faces of Foley. He then began teaming with Chainsaw Charlie(Terry Funk) regularly and they won the WWE Team Titles at Wrestlemania 14 but was short lived to a rule in the match. Shortly their after he returned as Dude Love for two months as a heel and feuded with Steve Austin for the WWE Championship. Once the feud with Austin ended he had his most famous moment in his career and possibly pro wrestling history.

In June of 1998, he fought The Undertaker inside Hell in a Cell. The match started on top of the cell where Foley was thrown off the cell first, and then thrown threw the top of it when he climbed back up. The match went another 10 minutes after both falls and people really began to get behind Mick Foley. For the rest of 1998 Foley slowly began to show his soft side to the fans while remaining dangerous in the ring. The last two months of 1998 he feuded with The Rock, Vince McMahon and the rest of the corporation. It was on January 4th, 1999 where he captured his first WWE Championship by defeating The Rock. Throughout the rest of 1999 he would be in the title picture and eventually teaming with The Rock to win multiple tag team championships. This team would forever be known as the Rock N Sock Connection.

Then after 2001 from 2008 he still made sporadic appearances in WWE feuding with guys like Randy Orton, Edge, Tommy Dreamer, Terry Funk and Ric Flair. He also spent sometime on the independent scene  and also helping children around the world. He has done a lot charitable work in different countries trying to help children who don’t have the health needs to other countries do. From 2008 to 2011 he spent significant time in TNA Wrestling where he feuded with Kevin Nash, Abyss, Kurt Angle and even rekindled his feud with Sting. In his time with TNA he won the TNA World Championship and Legends Championship (now known as the the TV Championship)

Since 2011 he has made multiple on WWE again and he had verbal feuds with CM Punk and Dolph Ziggler. Aside from his wrestling career, Mick Foley is an established author and has been on the New York’s Best Selling list. Here is a list of his publications

Mick Foley has also appeared in TV shows and movies including Beyond the Mat, Boy Meets World, Celebrity Death Match, and many others. Mick Foley is known all over the world and he deserves this honor very much. Here are my top 5 favorite Mick Foley matches.
5. Mick Foley vs. Randy Orton- Backlash 2004
4. Mick Foley vs. Ric Flair- Summerslam 2006
3. Mick Foley vs. Edge- Wrestlemania 22
2. Mick Foley vs. The Rock- Raw, January 4th 1999
1. Mick Foley vs. The Undertaker- King of the Ring 1998
Whether he was from Truth or Consequences, New Mexico, The Boiler Room or Long Island, New York Mick Foley is remembered where ever he goes. Congratulations to Mrs. Foley’s Baby Boy, The Hardcore Legend Mick Foley on being the first member of the WWE Hall of Fame in 2013.
Please Share This