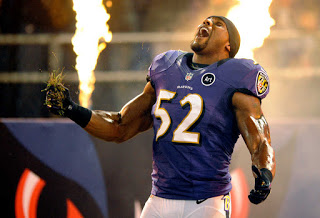 Some call him a hero. Others call him a glorified thug who should be in jail. Regardless of what you think of Ray Lewis, he’ s one of the all time greats on the football field. At 37 years of age, he announced his retirement. He was drafted 25th overall in the first round of the 1996 NFL Draft where he has been a Baltimore Raven for his entire career. A lot of people love Ray Lewis because of his intimidation and force on the field. Many consider him them greatest defensive player of the last decade.

There are others who hate Ray Lewis because of his alleged involvement in a murder in January 2000 at a Super Bowl party in Atlanta. The white suit that Lewis was wearing on the night of those murders was never found and therefore he was only sentenced to 12 months probation and fined 250,000 dollars by the NFL. A few years later he settled two civil suits with the the two victims families. In 2006, he became a born again Christian and re-devoted his life to Christ. In the end, his haters don’t realize how much charitable work he has done especially by founding the Ray Lewis 52 Foundation which is non-profit that helps disadvantaged youth.

Ray Lewis has much to be proud of in terms of his football career. Here is a recap of all he has done in his career.

-NFL 2000s All-Decade Team
-2050 tackles
-41.5 sacks
-31 Interceptions
The stats back his career up. Ray Lewis is a first ballot Hal of Fame player. Whether you hate or love him you have to respect he did on the field. Ray Lewis is, was and always will be the face of the Baltimore Ravens. The Ravens and the NFL will never ever have another Ray Lewis. Many people thought Ray Lewis would play forever but he has had numerous injuries the last few years. There is only so much one persons body can handle, even a warrior like Ray Lewis.
I tip my cap to #52 Ray Lewis on a wonderful career and legacy. He will be missed by the Ravens, the NFL and anyone who appreciates a good defensive player. Congratulations to Ray Lewis on a wonderful career and may God Bless you on what ever road you may go.
Please Share This