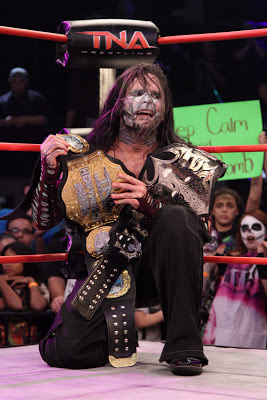 TNA officially kicked off the new year with their first pay-per-view. The first match of the pay-per-view was for the tag team championships. It was Hernandez and Chavo Guerrero taking on Joey Ryan and Matt Morgan. The champs retained the titles but the more important issue at hand is why in the hell is Matt Morgan teaming with this wanna be Joey Ryan? Matt Morgan is great on his own and doesn’t need to be in a tag team.

Samoa Joe and Mr. Anderson was added late in the day and it was pretty predictable. Anderson is looking more and more to be a member of Aces N Eights as Mike Knox came out to help Anderson win the match.

Kenny King and Christian York have very unique styles that made for a fun match to take on RVD. This match was quick and did not go as long as I would have like to seen. York won the match and immediately had to RVD for the X Division Championship. RVD retained the title but both men showed off their very unique traits and I have to say if anyone reminds me of RVD it’s Christian York. He has that carefree attitude about him and leaves it all in the ring like RVD. I honestly would love to see a triple threat match between York, King and RVD in a ladder match. I think that would have a profound impact on the TNA Impact’s X Division.

Devon and Joseph Park was pretty fun to watch. I think it’s cool that there showing another side Chris Parks but he needs to go back to being Abyss. The character Abyss needs to be the one who takes out Aces N Eights, not a lawyer that loses to Devon on a regular basis

Gail Kim almost swept the gauntlet by taking out Mickie James, ODB and Miss Tessmacher. However she met her match in Velvet Sky who won a title shot in a little bit of controversial fashion. It’s good to see Velvet back and getting fully thrown into the Knockouts Division.

James Storm and Christopher Daniels are two totally different people with two different styles. They have been mainstays in TNA which made this match even more fun to watch. Kazarian was out at ringside the entire time being a pest but it was a pretty evenly matched fight. I thought James Storm had the match won but Daniels pulled out another stunning victory to gain a shot at the TNA World Heavyweight Title. I only wonder what AJ Styles is thinking right about now.

Sting got his revenge against D.O.C. tonight and thanks to Bully Ray was not ambushed by the gang. Sting is one of those guys that is still kicking ass when the others who are his age can’t. He is truly an icon and a legend. I don’t know many years Sting has left in him but he still getting people over in the process and helping the young guys out.

Jeff Hardy vs. Austin Aries vs. Robert Roode for the TNA World Heavyweight title was a great match with a ton of great chemistry. I honestly thought that Roode and Aries were going to get pinned at the same time but nonetheless Jeff Hardy retains the title and keeps his momentum going from 2012 to 2013. Jeff Hardy is a mainstay in TNA right now and I think it would be great to take on some newer guys like Magnus, Kenny King, and Christian York. Sometimes TNA is like WWE in the fact that they don’t push new talent. New stars better rise soon otherwise the wrestling business is going under.

The show was good and they did give it a good effort. I would give 7 out of 10 to this PPV for hard working individuals and a solid main event. I hope TNA can continue to their momentum in 2013. Good show and good matches by everyone. TNA is alive and doing well. Let’s see if in 2013 they make an impact.