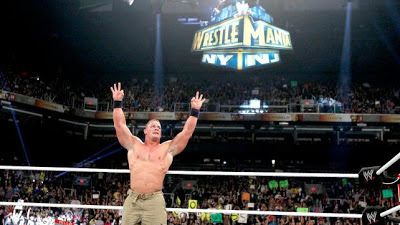 Tonight was the annual start to the Road to Wrestlemania and all I got to say is there is nothing like a good old fashion Royal Rumble. The Rumble is full of shockers, surprises and suspense. This year’s Rumble was no different. On the pre-show Antonio Cesaro retained the United States Championship and beat The Miz. The first match of the evening was the Last Man Standing Match between Alberto Del Rio defending the World Title against the Big Show. Before Del Rio came to the ring Bret Hart greeted him and wished him luck. During the match Big Show chokeslammed Del Rio off of a rail that lit up at the entrance. Both men did some creative stuff especially with the ending when Ricardo duct taped Big Show legs to the rope allowing Del Rio to retain the World Heavyweight Title.

Then they had an old school series of promos from superstars that are in the Rumble. I really like that they did that because that’s how they did it back in the early 90’s. I like the old school thought behind the new technology and set of superstars.

Next up was the Royal Rumble and obviously as well know Dolph Ziggler was number 1. Chris Jericho  was the surprise number 2 entry. I was totally shocked. Another shocker was the return of Goldust and he confronted his brother Cody right away. There wasn’t a lot of eliminations right away and that’s good because there was a lot of star power in this match. Kofi Kingston is a genius when it comes to saving himself from elimination once again using a chair as a pogo stick. Then Godfather came out with the hoes and quickly was eliminated by Ziggler in a matter of 3 seconds. John Cena entered number 19 and then things started changing. Later on in the match Kane was eliminated by Daniel Bryan. That was a really funny spot. Number 30 ended up being Ryback and he was one of the final three with Sheamus and Cena. Then Ryback eliminated Sheamus to be the final 2 entries. John Cena eliminated Ryback to win the Royal Rumble.

I absolutely hate this move of Cena winning. I can tell you that instead of having the jobbers in the match they should have had the rumored names of Shelton Benjamin, Carlito, Chris Masters, Hurricane Helms, John Morrison and Mark Henry in the match instead of 3MB, David Otunga and Santino Marella. The Royal Rumble match as a whole was a great full of some great performances by the likes of Jericho and Ziggler who lasted until the last man came. Dolph Ziggler impressed the hell out of me. John Cena is going to the Main Event but who will he face? Stay tuned on the Road to Wrestlemania. 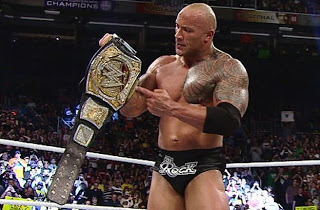 In the Main Event, it was The Rock chasing the WWE Championship by taking on the champion CM Punk. This was a physically intense match  This match had great pyschology in it and even had a major spill that caused the announce table to break under them. The Rock and Punk brought something special tonight and this is a match both men will be remembered for. The Rock was attacked by The Shield in the dark and the referee didn’t see them. CM Punk then dragged The Rock back into the ring for the win and continuing his reign. As Punk was celebrating 434 days as champion Vince McMahon came out and was going to strip CM Punk of the title. Before he could strip Punk of the title, The Rock got on the mic and said restart the match. The match was restarted and Punk tried mount an offense but in the end The Rock his signature spine-buster followed up with a People’s Elbow. The Rock won his first title and is now an 8 time WWE Champion. With this win and championship gold The Rock will now headline Wrestlemania 29, at Metlife Stadium on April 7th.

The Royal Rumble was better then most pay-per-views WWE has put on as of late. I would have to give it 8 out of 10 for solid matches. Punk’s title reign has come to an end and it was a great one. I have mixed emotions about The Rock being WWE Champion but I will get into that on a later day. Royal Rumble was great and now it’s time for Road to Wrestlemania to play itself out. The next time WWE is on PPV is February 17 which will be the Elimination Chamber. That night will shake a lot of things up for Mania. Three weeks tune into the Elimination Chamber and we shall see how the Road to Wrestlemania unfolds. 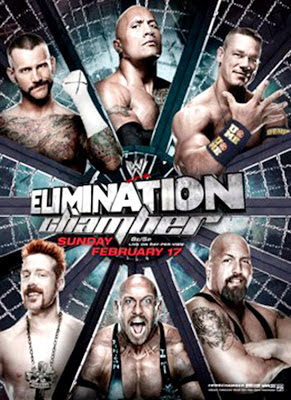