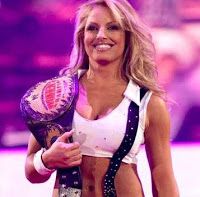 When you think of women in wrestling over the last twenty years the one name that comes to the top of that list is Trish Stratus. She made her debut on March 19, 2000. She came on to the scene after being trained Ron Hutchinson and Dave Finlay and she began to manage. Some of the people she managed were Test, Albert and Val Venis. By 2001, she was wrestling full time. She was a 7 time WWE Women’s Champion defeating Lita, Jacqueline, Ivory, Molly Holly, and Jazz in a 6 way match for her first ever title reign. She has also beaten Victoria in the past as well. While she was in her prime she managed and wrestled taking on all comers like Mickie James, Melina and others. She also managed Christian, Tyson Tomko, Chris Jericho among others. Trish also held the Hardcore Title for a minute when it was under the 24/7 rules. Trish retired from being a full time performer in 2006 but has made brief appearances and was a trainer on the last edition of Tough Enough.

Trish is well know all over Canada. She has hosted Canada’s Walk of Fame, was a spokesperson for World Natural Sports Association and was apart of the CBS reality show Armed & Famous. Trish has also contributed to many charities including Ronald McDonald House, Dreams Take Flight and the Special Olympics. Now a days Trish has a studio in Canada dedicated to Yoga and her studio is known as “Canada’s largest eco-friendly yoga studio.” She is also very dedicated to the environment.

Trish was a marketable Diva who has the beauty, the class and the talent. So many Diva’s of today got a chance to be in the spotlight because of her. She has competed in a couple of matches since her retirement match and still brings a thrill to crowd. She is one of a kind and deserves to be in the WWE Hall of Fame.

Congratulations to Trish Stratus for bringing some Stratusfaction to the WWE Hall of Fame.