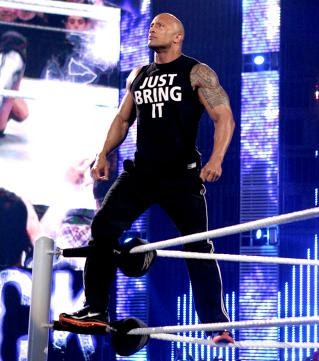 Last night on WWE Monday Night Raw, The Rock returned to WWE for the first time since Raw 1000 in the summer. The last time we saw The Rock he was laid out by CM Punk which is now the setup for their WWE Championship match at the Royal Rumble. I honestly have not seen that much intensity, tension and no pun intended, electricity in the ring in a long time. The last time I remember getting goosebumps watching Raw was two years ago when The Undertaker and Triple H were in the ring setting up for their match at Wrestlemania 27. They said nothing to each other and was one of the best moments in Raw history.

Last year The Rock worked with John Cena and I was very disappointed with their match after a year long buildup. Just because he didn’t have the chemistry Cena doesn’t mean he cant have chemistry with anyone. Last night he had great chemistry with CM Punk on the mic and I think Punk’s real life character and wrestling style will bring the chemistry to the forefront during their match at the Royal Rumble. I started to think to myself, what it The Rock came back to WWE permanently? There are a lot of young and hungry guys out there that would benefit from work with The Rock.

Some of the guys that I would like to see The Rock go against are guys like Dolph Ziggler, The Miz, Wade Barrett, Sheamus, Randy Orton, Antonio Cesaro, members of the Shield, and many others. The stars of today just don’t have the star power that guys like Austin, The Rock or even Triple H did back in the Attitude Era. In order to create stars, the stars of the past need to put the young guys over. The reason guys like Randy Orton and Sheamus are successful is because they worked with someone like Triple H and they went over on Hunter. Triple H was smart in the aspect that he knew that new stars needed to be created. Unfortunately for the stars of today there is no Stone Cold, The Rock or The Undertaker on a fill time basis.

If The Rock came back full time the whole landscape of WWE would change for the good. People love The Rock, even the wrestling fans who get pissed that he left the way he did. WWE needs someone like The Rock, or a Stone Cold. I think that’s why people can’t get into WWE like they use to. There is no star power in the modern era like there was in the Attitude Era.

So what if The Rock came back full time? Who would he face? More importantly, what kind of legacy would he leave on the WWE?

Be sure to go to https://www.facebook.com/HollywoodsWorldofSports to vote on a poll that asks the question, Who would you like to see The Rock face on his road to Wrestlemania 29?