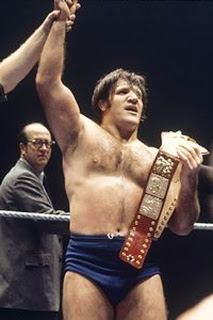 In 1959 a passionate talented young Italian started his legacy in the world of pro wrestling. He was trained by Ace Freeman, and Rex Perry. He made his debut with the World Wide Wrestling Federation in 1960 at Madison Square Garden. He began teaming with Antonino Rocca then moved over to a singles career and in 1963 he hit the big time.

On May 17th, 1963 he won the WWWF Championship from Nature Boy Buddy Rogers at Madison Square Garden. He and Rogers had a fierce rivalry in and out of the ring. After Rogers the first man that challenged Bruno was Gorilla Monsoon. Bruno fought some of the top bad guys in the business including Killer Kowalski, Giant Baba,Gene Kiniski, Dr. Jerry Graham, Johnny Valentine, The Sheik, Freddie Blassie, Curtis Iaukea, Bill Watts, Professor Toru Tanaka, and George “The Animal” Steele.
He held that title for nearly eight years until Ivan Koloff defeated him in January 1971. Shortly after Pedro Morales won the title and began a feud with Sammartino but Morales was not the one who Bruno took the title back from. On December 10th , 1973 he won back the title from Stan Stasiak. In his second run he took on all comers including John Tolos, Bruiser Brody, Ken Patera, Baron Von Raschke, “Superstar” Billy Graham, Angelo Mosca, Ernie Ladd, and Nikolai Volkoff. He lost the the title to Superstar Billy Graham in April of 1977 but he would continue to feud with Graham along with Blackjack Mulligan, Lord Alfred Hayes, Dick Murdoch, “Crippler” Ray Stevens, and his protege Larry Zbyszko

By the time the Rock N Wrestling Era started Sammartino’s career began to wind down. He feuded with Roddy Piper, Randy Savage, Paul Orndorff, Adrian Adonis, Honky Tonk Man and The Hart Foundation. His last match in the WWF was when he teamed with Hulk Hogan to defeat King Kong Bundy. After his last match he briefly commentated with WWE and also making appearences in NWA, WCW, TNA, and ROH.