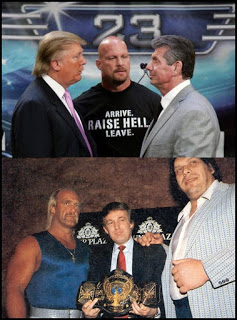 If anyone from the celebrity world or public eye ever deserved to be in the WWE Hall of Fame it is Donald Trump. The Donald with his trademark hair have always been just as controversial as Vince McMahon. Trump has contributed so much to the WWE not only in terms of a personality but financially as well. Wrestlemania 4 and 5 were held at the famous Trump Plaza. Wrestlemania 4 saw the following:

Bad News Brown vs. Hacksaw Jim Duggan went to a no contest

He was a spectator at Wrestlemania 7 and many years later he was apart of Wrestlemania again. At Wrestlemania 23 he was in the Battle of the Billionaires. Trump was represented by Bobby Lashley and McMahon reprented by Umaga. Stone Cold Steve Austin was the special guest referee and at the end of it Lashley and Trump shaved Vince McMahon bald. Donald Trump at one point “bought” WWE and brought Raw live with no commercials and refunded every person who bought a ticket their money back.
WWE is not the only group of people with star power that Donald Trump has worked with. Trump has worked with the following on his show Celebrity Apprentice:
Lennox Lewis
Piers Morgan
Trace Adkins
Gene Simmons
Dennis Rodman
Clint Black
Herschel Walker
Joan Rivers
Bret Michaels
Sharon Osbourne
Bill Goldberg
Sinbad
Darryl Strawberry
Jose Canseco
Arsenio Hall
Lou Ferrigno
As you can see Donald Trump can handle a lot of egos in a competitive environment. Donald has also been involved in many political and activist movements. The man is always surrounded by beautiful women and has so much money wrapped in so many different things. Donald Trump has always been  a WWE fan, and supports Vince McMahon in a lot of projects.
Congratulations to Donald Trump who is now going to be in the WWE Hall of Fame. It’s well deserved, well earned and accomplishment that money truly can’t buy.
Please Share This