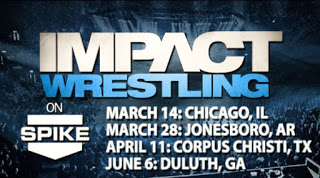 Last week Dixie Carter announced that TNA would be taking Impact Wrestling on the road starting March 14th live from Chicago and will continually decrease shows from the Impact Zone. Shortly after Hulk Hogan said an interview that Dixie Carter needs to start treating TNA like a business and not a hobby or it will end up like WCW. I have to agree with Hulk on this because TNA is a lot like WCW in so many ways. With these changes coming soon I have my ideas on what should happen.

The first idea is that these pre-recorded 15 dollar pay-per-views they are doing once a month starting in April shouldn’t be recorded. They should use the Impact Zone twice a month when they don’t hold a major pay-per-view. They should have Impact on Thursday and these special One Night Only shows on Friday Night. This would continue to keep the Orlando fan base strong and by having these shows be live it could filter in to the storyline.

As far as the big shows of Genesis, Lockdown, Slammiversary, and Bound for Glory they should be held in major cities. I think Slammiversary should always be held in Nashville but the other three in different locations. The other idea behind this thought is that if you have a have pay-per-view in Detroit for example they should spend two weeks before the pay-per-view touring Michigan and have the two Impact shows in cities surrounding outside Detroit like Ann Arbor and Flint to build some momentum and attention for the big show. I think it would create more interest and ticket sales.

The last two Impact shows in Orlando will be February 28th and March 7th. I think it’s a bad mistake to just totally abandon the Impact Zone like they did the Asylum in Nashville. Personally I think that TNA should return to the Asylum, Impact Zone and run at the old ECW Arena atleast once every 3 months. I also would like to see it run Hammerstein Ball Room Arena that old ECW shows ran from.

There are ways that this directions could be really good or it could turn out really bad. They need sign some former WWE guys that should have been used correctly and re-sign old TNA starts that were really popular before it got to SpikeTV. One thing is for sure, and that is March 14th Chicago will have an Impact.