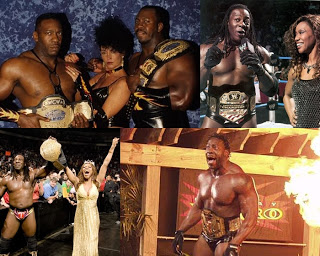 Growing as a fan of WWE and WCW the first ever live event I went to was a WCW Nitro at Van Andel Arena in Grand Rapids, MI. One of the many stars I saw that night was Booker T, who at the time was one half of Harlem Heat. Little did I know that Booker T would go on to have a wonderful career.

Booker T was trained by Ivan Putski and debuted in 1989. He began is career with his brother Stevie Ray in Houston Texas. In 1993 they became Harlem Heat and feuded with some great tag teams early on.  They feuded with the Nasty Boys, American Males, Stars n Stripes, Public Enemy, and Dick Slater/Bunkhouse Buck. By the late 90’s Booker began to break out on his own. Booker T won his first singles career by defeating Disco Inferno in December 1997. He feuded with Perry Saturn, Finlay and even Bret Hart. In 1999 he reunited with Stevie Ray to feud Filthy Animals, West Texas Rednecks,  and others.

Before WCW closed in March 2001, Booker T was a main eventer holding the WCW Heavyweight Title multiple times. He made his WWE debut at the King of the Ring in 2001 attacking Stone Cold Steve Austin. He feuded with The Rock, Kurt Angle and Steve Austin in the first six months of his WWE career. Once the alliance angle ended he teamed with multiple partners to win tag team gold with his partners being Goldust and RVD. In 2003, Booker T was in the World Title Match at Wrestlemania 19 against Triple H. Over the next few years Booker would feud with The Undertaker, John Cena, JBL, Christian and Chris Benoit.

In 2006, Booker T won the King of the Ring tournament becoming King Booker. During this run he feuded with Bobby Lashley, Batista, and Kane. He also won the World Heavyweight Championship from Rey Mysterio during his time as king. He left in August 2007 after he lost to Triple H at Summerslam due to multiple personal and professional issues.

From 2007 through 2009 Booker was an active member of TNA Wrestling feuding with the likes of AJ Styles, Samoa Joe, and Robert Roode. He became TNA Tag Team Champions with Scott Steiner and won the first ever TNA Legends title. He was also part of the legendary group, the Main Event Mafia. The Main Event Mafia also consisted of Sting, Kurt Angle, Kevin Nash, and Scott Steiner.

In 2011 he reappeared in WWE at the Royal Rumble and since then has been a commentator, and now is the General Manager of Smackdown. He has also competed in several matches with Cody Rhodes for the Intercontinental Championship.