This week on the Road to Wrestlemania the buildup for the big event was nothing worth bragging about. John Cena kicked off Raw with his a speech and declaration about how he will beat The Rock. The Prime Time Players came down and interrupted him which cost Darren Young to get a beat down from Cena.

The biggest buildup this week had to be Triple H signing this contract for his match with Brock Lesnar. Before Lesnar could come out Triple H beat up Paul Heyman and made him suffer. The stipulations for the match are No Holds Barred and if Triple H loses his career is over.

Speaking of tag team matches, Ryback was removed from the 6-man tag match involving The Shield taking on Sheamus and Randy Orton. Ryback will be taking on Mark Henry in what will an interesting match of two powerhouses. As for Sheamus and Orton, they officially do not have a partner but the Big Show has been making a case to be their partner. It’s pretty much set in stone but it isn’t official yet.

The World Title feud between Del Rio and Swagger took an intense turn in Swagger’s favor. After Del Rio defeated Cody Rhodes, Jack Swagger came down and broke Ricardo’s ankle after he attacked Del Rio. Swagger went on the defeat Chris Jericho for the second week in a row on Smackdown. I hate to say it but I am still more interested in the World Title match then I am the WWE title match. Swagger and Del Rio have a great story and rivalry going.

Other matches that have been hinted are as follows
Intercontinental Championship Match: Wade Barrett vs. The Miz
Fandango vs. Chris Jericho
8 person tag match: Cody Rhodes/Damien Sandow/Nikki/Brie vs. Tensai/Brodus Clay/Cameron/Naomi

The under card doesn’t look too terribly bad but they have a lot to prove considering this Wrestlemania will be heavily watched with everyone who is on. Here are the matches that have been made official: 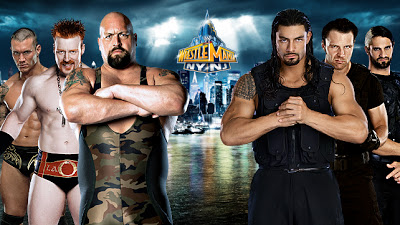 The one thing I am surprised by is that Antonio Cesaro, Kofi Kingston, Kaitlyn, and a few others do not have a storyline setup for Wrestlemania 29. Rumor has it that Wrestlemania 29 will have an hour long pre show with more than one match and plenty of fan interaction. Keep checking back for more Road to Wrestlemania 29 coverage as we are closing in on two weeks until the big show.
Please Share This
This Post Has One Comment