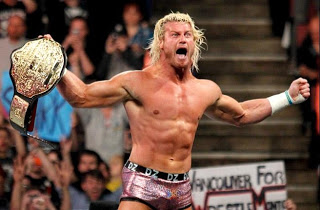 The night after Wrestlemania is usually pretty wild and epic. Tonight Wade Barrett regained the Intercontinental championship, the crowd was on fire and the Brothers of Destruction reunited.  Dolph Ziggler started in WWE 7 long years ago under his real name Nick Nemeth as a caddy for Chavo Guerrero’s gimmick Kerwin White. After the gimmick dropped he became a member of the Spirit Squad and was just known as Nicky. After the Spirit Squad ran its course Nemeth had his look and character repackaged.

In 2007, enter Dolph Ziggler. In his WWE career he has held the Intercontinental Championship, United States Championship, Tag Team Championship and last year captured the Money in the Bank briefcase which led him to tonight. Dolph has been very outspoken about how he feels it’s time. Tonight it was his time and he took advantage of an injured Alberto Del Rio.

Dolph Ziggler’s World Title win was gratification for me because he reminds me so much of Mr. Perfect Curt Hennig. Hennig never held the WWE Championship because of the Hulk Hogan era. Dolph has stolen the show on so many occasions, and at times wrestled two matches on pay-per-views. Ziggler is the future of WWE and it’s about time he got the spotlight put on him. I see a lot of great things happening with Ziggler as champion. I really hope WWE does this right and gives him a lengthy title reign.

With Ziggler as champion now I really want to see a feud between him and The Miz over the title. I’ve been saying this ever since their match on WWE Main Event in November of last year. The top 5 people I would love to see Ziggler face besides The Miz are Chris Jericho, Christian, Alberto Del Rio, Kofi Kingston and if he comes back….Rob Van Dam. Only time will tell to see how Dolph Ziggler’s first legitimate World Title reign goes.