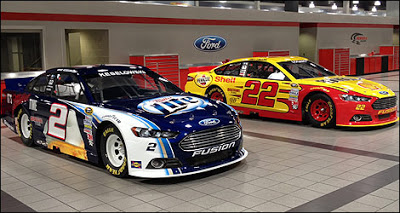 This past week was a controversial week in NASCAR for one team. Penske Racing is coming under a lot of fire because both Joey Logano and Brad Keselowski’s cars failed pre-race inspection. Logano had to start in the back because he was not out for the lineup in time due to having parts pulled from his car.

Once the race was over Joey Logano did not have much to say but the defending NASCAR champion had more then just words in his interview. ESPN had to edit much of the interview with the amount of expletives Keselowski was using. Penske has been under fire a lot this year but this is not the first time a race team has failed inspection. Hendrick Motorsports suffered consequences in 2011 when Jimmie Johnson’s car failed inspection. The result was crew chief Chad Knaus being suspended and the 48 team being docked points which hurt them in the standings.

With some these recent problems maybe it’s time for NASCAR to approach inspections differently. The first thing NASCAR should do is go to each teams facilities three times a year. They should do inspections three times a year. Inspections should be held a week before Daytona, during the middle of year and a week after the last race of the year. NASCAR should inspect all the shops including tools, and parts being used. If they find shops using illegal tools and parts then issue a warning that if they are not disposed of then they will sit out the first race of the year. That’s one way of handling it.

The second way is after the final practice session is done allow all teams three hours to work on any changes to their car. Once those three hours up NASCAR officials should go inspect each car and then shut down the garage for the night. If a team has an issue with the car like an engine, transmission or radiator then they should be given extra time with a NASCAR official observing the changes. This way of doing things would make it a fair and equal playing ground for everyone.

NASCAR has been under fire a lot already in 2013 and if the drivers get angry at how officials handle things it will only bring negative publicity to the sport. The viewers shouldn’t just be looking at Penske Racing. All the race teams try to get some sort of an advantage. It’s just a matter of who gets caught and who doesn’t. Keep checking back on anymore developments regarding inspections. It’s controversial and you know Hollywood’s World of Sports. We love controversy.