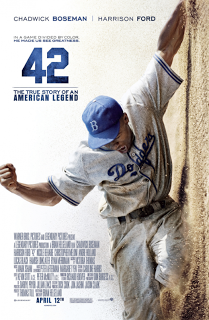 All my life I have been a baseball fan and have always been passionate about the game. As I have gotten older I’ve learned to appreciate the history of America’s past time. In today’s generation you have many different ethnicity’s and all of them can be attributed to Jackie Robinson breaking the barriers.

All I ever knew of who Jackie Robinson was, is that he was the first ever  African American baseball player that made it. In the movie 42, it shows all of the aspects of Jackie Robinson. It shows the husband, the father and the hero that many have heard about for decades.

The movie highlights Jackie Robinsons stints as a member of the Kansas City Monarchs and Montreal Royals. The movie primarily focuses on Robinson’s 1947 rookie year with the Brooklyn Dodgers. The movie documents the trials and tribulations that Robinson went through. He was resented by teammates, abused by opposing teams and threatened by locals wherever he stayed.

Throughout the movie it shows how Jackie Robinsons teammates started to defend and accept him into the Brooklyn Dodgers organization. I also love that they highlighted Wendell Smith’s journey with Jackie and how his work brought this great story to life. Wendell Smith was the first ever African-American writer to be inducted into the Baseball Hall of Fame.

My favorite scene in the movie was when Jackie Robinson was in the trainers room and he asked Branch Rickey why he was doing what he was doing. This scene to me was so powerful and inspiring. Branch Rickey’s explanation was the one strong message I took away from this movie. I also love Rickey uses the Bible to prove his point about why Robinson should be accepted.

If you are a sports fan, more importantly a baseball fan this is a movie you should watch. I think the late great pair of Siskel and Ebert would have given this movie two thumbs up. I never really appreciated the fact that all the MLB players wear the number 42 until I saw this movie. This a great movie and a great tribute to a legend and an hero.

Jackie Robinson is a true American Legend. The movie 42 made sure his legacy will never be forgotten.