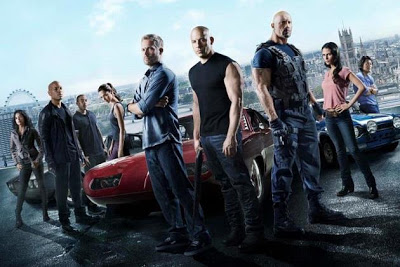 Tonight I went to AMC Star Theater 18 in Grand Rapids for advanced screening of Fast and Furious 6. I knew this was going to be a great movie from the previews. I have been a fan of these movies for over 10 years and the series really picked up in Fast Five and gave it a whole new feel.

Usually I don’t write movie review unless a pro wrestler or athlete are in the movie. In this case, The Rock Dwayne Johnson and former MMA star Gina Carano starred in the movie. The movie starts with Toretto and Brian as retired criminals. Hobbs tracks them down and shows them that Letty is still alive from which we saw at the end credits of Fast Five. Hobbs gets the help of Dom’s team to track down Letty and the man that she is working for. In one scene of the movie we get reacquainted with some of the characters from Fast and Furious 4.

I am not one of those writers that is going to spoil the entire movie but this is not like any other Fast and Furious movie that has been made. This movie has some crazy intense scenes in it and has a lot of flashbacks from the other five movies It has some funny and sad moments as well. I have to tell you that Ludacris and Tyrese need their own comedy show because these two guys together are hilarious. At the end of the movie it shows a clip that puts the connection with Tokyo Drift into the series. Fast and Furious 7 will be primarily held Tokyo but for now enjoy Fast and Furious 6. This movie had energy, action, emotion and some memorable moments. I also have to mention that you see one of the best double switches in movie history. If you don’t know what I mean by double switch, it means when one person goes from bad to good and the other good to bad at the same time. A prime example of this is in wrestling at Wrestlemania 13 between Bret Hart and Steve Austin.

Parts of Fast and Furious 6 felt a pro wrestling match especially the fight scene in the airplane. Vin Diesel and The Rock have one of the craziest endings to a fight ever as a team. I am a fan of the Fast and Furious series but this movie made me a bigger fan. I would definitely rate this two thumbs up and 8.5 out of 10 for a little bit of everything and a great story that revolved around Dom and Letty.

Ride or Die is the theme of Dom and his family so take the ride and go see Fast and Furious 6.