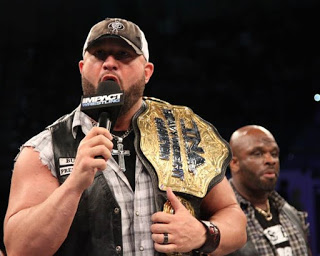 Tonight was the annual celebration of TNA Impact Wrestling as a company and tonight really set the pace for the rest of the year. The first match was an Ultimate X match which stole the show right away. Chris Sabin reclaim glory and gained redemption by winning the X-Division Title against Kenny King and Suicide. The X Division is still the heart and soul of this company and it needs to be showcased more. There are so many great X Division wrestlers out there they need to have a chance to shine.

It feels like the Aces N Eights storyline has taken away from some of the great talent TNA has. Aces N Eights highlighted three matches this evening. The 6-man tag featured Magnus, Samoa Joe and a returning Jeff Hardy. All three of these men are main event material and should be in the spotlight on their own. The other thing that has bothered me as a viewer is that Devon has not defended the TNA Television Title very often. When I think of a Television Championship, I think of the title being defended every single week on TV just like it was when WCW had their version of the title. Tonight Devon lost the title to Abyss and hopefully Abyss will defend it a little bit more than it has been.

There are three things that I believe TNA does better than WWE. I think TNA pushes and promotes younger talent a lot better. Tonight was a prime example when Jay Bradley took on Sam Shaw and advanced in the Bound for Glory Series. I really like that the Bound for Glory series is featuring all the TNA Gut Check winner this year. It gives a young guy thats normally not in the spotlight a chance to get noticed and be in the spotlight. Secondly, the Knockouts Division is superior to the WWE Diva’s division. The girls in TNA are more aggressive and more athletic. That was proven in a Last Knockouts Standing match between Gail Kim and Taryn Terrell. Lastly, the tag team division seems more solid and more equal than the WWE tag team division. Gunner and James Storm were put together and won the tag titles against three other great teams.

Angle had a classic with AJ Styles tonight. I love when these two are in the ring together. They always have memorable matches and tonight was no different. Angle won but I really enjoy the AJ Styles storyline right now. It really reminds me of the Sting versus n.W.o. storyline in 1997. I think you will se AJ come full circle within the next year. They needed to do something different with his character and I like it.

The Main Event was Bully Ray versus Sting. I have to give credit where credit is due. Sting at 54 years of age is still working harder than anyone else in the business. Even though Sting lost to Bully Ray and can never wrestle for the TNA World Title he has proven that he could possibly be the greatest of all time. At that age and to be able to perform at the level is amazing. Bully Ray as TNA World Heavyeight Champion is a great thing. He is one of the best heels the wrestling business has ever seen. I love how he is the same guy he use to be in ECW. He is so hated and so great as a champion that it’s hard to say anything bad about him

Slammiversary showed that Aces N Eights can be beaten and still look dominant at the sametime. It also showed that TNA has a lot of great young talent who need to be put in the spotlight more often. Having only four major pay-per-views a year makes it that much more impactful when there is one. It will be one interesting road to Bound for Glory so tune in to see the aftermath of Slammiversary XI.