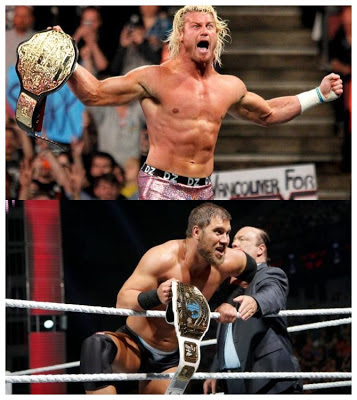 Before Curtis Axel became a Paul Heyman Guy, one man with his long blonde hair, agility in the ring and athleticism was getting a lot of comparisons to “Mr. Perfect” Curt Hennig. Dolph Ziggler started off being a caddie for Chavo Guerrero, and a cheerleader in the Spirit Squad. Once the cheerleaders broke up Nick Nemeth became Dolph Ziggler. He had a cheesy gimmick but eventually became the man with all the agility and athleticism in the world.

When Joe Hennig was stuck being Michael McGillicutty, Dolph Ziggler was a United States Champion, Intercontinental Champion and some nights wrestling two matches on a show. At one point, Ziggler’s theme music was titled “I am Perfection.” Over the last year Ziggler has become the show off while mimicking “Ravishing” Rick Rude and even using the Rude Awakening from time to time. How ironic is it that Rick Rude and Curt Hennig were best friends. Dolph made it to the top and became a WWE World Champion the night after Wrestlemania 29. It was an accomplishment that Curt Hennig never had a chance to accomplish.

Then on May 20, 2013, Paul Heyman introduced his newest client in the form of Curtis Axel. He was an FCW Champion under his real name Joe Hennig and a Tag Team Champion under the name Michael McGillicutty. Once the Nexus broke up he was barely showcased on TV. In his first match on pay-per-view he won the Intercontinental Championship, a title that his father made prestigious in the early 90’s. Curtis Axel has the moves, the music and the title his father once had. With all these things in place the feud that many wrestling fans would like to see could and should happen.

I think a feud between Dolph Ziggler versus Curtis Axel would be perfect. It could be something that could be made personal with Axel calling out Ziggler for pretending to be his dad and thinking that he is better than Curt Hennig was. I think this is a feud that should happen once Ziggler regains the World Heavyweight Title and Axel drops the Intercontinental Title. This feud should go on until Axel does what his father couldn’t do and that is win a World Championship.
Whether or not this feud ever takes place remains to be seen but it should happen down the road. Ziggler who has the looks and Axel who has the blood in him would have great chemistry and have a lot to prove. We will call this feud the perception of perfection versus the perfect prodigy. Dolph Ziggler vs. Curtis Axel…it would be absolutely perfect.
Please Share This