skip to Main Content
The brackets for thetournament to crown a World Champion for Ring of Honor have been set. The dates have also been finalized for the first round matches. Here is how the tournaments first round will play out:

A lot of men have held the ROH World Championship. The match to determine the first ever ROH World Champion was a Fatal Four Way 60 minute Ironman Match in which Lo Ki defeated Christopher Daniels, Spanky, and Doug Williams. A lot of notable names have held the ROH World Championship and that list is filled with greatness that includes:
Samoa Joe
Austin Aries
Brian Danielson (WWE’S Daniel Bryan)
CM Punk
Tyler Black (WWE’s Seth Rollins)
Jerry Lynn
Nigel McGuinness
Only two wrestlers in this tournament have previously held the World title and that is Kevin Steen and Roderick Strong. This tournament is filled with a lot of young talent and I am sure other wrestling promotions will be watching. Stay tuned to see who becomes the new ROH World Champion and puts their name in history books. 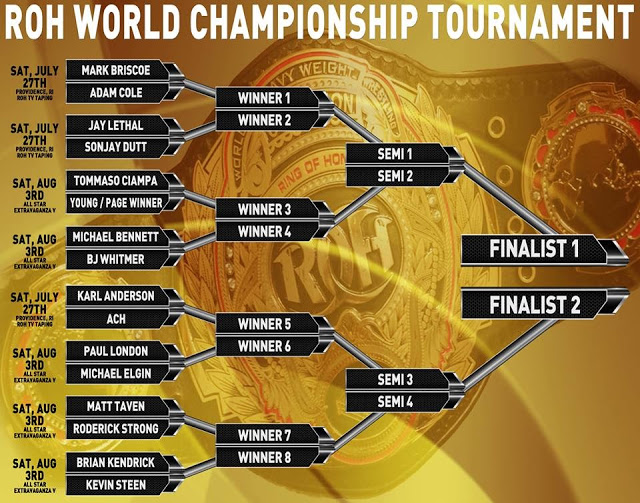