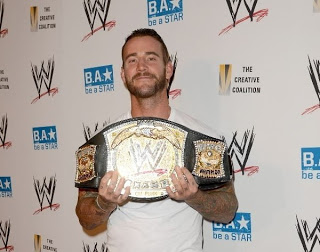 I’ve been thinking alot about all the news I see on people like Aaron Hernandez, Ryan Braun and others as of late. I see on ESPN that are making horrible choices and hurting the people around them. When I have been thinking about about these athletes who make poor decisions I think about one of my favorite pro wrestlers and a quote he always uses when he was playing a bad guy. That quote is “Straight edge means I’m drug free, alcohol free, and better than you.” I think after all these years that maybe he wasn’t talking to the crowd. I think maybe he was talking to the Lance Armstrongs, Ryan Brauns, and A-Rods of the world! Punk lives his life in a clean way and should be rewarded for doing so.

I am not saying CM Punk or any other professional athlete should be put on a pedestal but I believe they are the ones who should be getting endorsements, and talked about more. CM Punk the character has done some horrible things as a bad guy on TV but Phil Brooks lives a clean and honest lifestyle. I am sure there athletes out there that live the same way but for some reason we aren’t talking about people who do things the right way, we are focusing on those who cheat and lie.

Think back to the late 90’s when Mark McGwire and Sammy Sosa broke Roger Maris’ single season homerun record. They were heroes, the were giants of the game and then many years later it was revealed that both were suspected of using PEDs. I have always wondered why we didn’t go back and talk about Ken Griffey Jr., Frank Thomas and Jim Thome and some of the great seasons they had. They were never steroid users, they were never accused or suspected of cheating the game.

Another person we have been hearing a lot about is Aaron Hernandez. Why don’t we talk about what a great role model Tim Tebow is and how he is someone that kids should inspire to be like. There are so many examples out there that can be talked about. I am not saying everyone should embrace the straight edge lifestyle that CM Punk lives but I wish the athletes who lived cleanly and did the right things would get more attention.

I would like to say that I don’t think CM Punk or athletes who stay clean are above or better humans than those who don’t but I will say they do make better choices than the ones who don’t. If you don’t believe that straight edge is a way of life ask Los Angeles Angels Pitcher CJ Wilson, or members from some of your favorite bands such as Fall Out Boy, Papa Roach and even Metallica.

Athletes and celebrities are the heroes in the eyes of many but some of them make bad choices and should not be looked at as a rolemodel. So let me ask you, who do you think should have the rewards and the spotlight? The ones who live the right way or the ones who make bad choices?