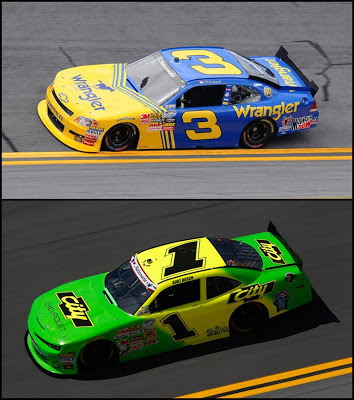 Whether it be at the end of February during Speedweeks or 4th of July weekend, nothing beats the excitement of a race at Daytona. Since I was kid I have loved watching the NASCAR races there regardless if it’s the Trucks, Nationwide Series or the Sprint Cup.

Daytona has brought a lot of excitement, a lot of cheers and at times a race track full of people shedding tears. In 2001, Daytona was host to NASCARs darkest day when Dale Earnhardt died on a last lap crash. Five months on a hot July summer night, Dale Jr. won and honored his dad’s memory.

On July 2nd, 2010 Dale Jr. would be tribute to his father again in the Nationwide Race. He drove the number 3 Wrangler Chevy, a car his father once drove in his early years. So many great tributes and past paint schemes have returned at Daytona. It gives the fans in attendance and viewers at home a nostalgic feeling of the old days. Even in the old days a dark horse could win the 500 or 400.

There are names like Trevor Bayne, Jamie McMurray, Derrike Cope, Ernie Irvin, Michael Waltrip and Ward Burton who were all long shots to win the 500. The same could be said for the 400 in July. Men like Jimmy Spencer, John Andretti, David Ragan, and Greg Sacks have won at this famous track when no one expected them to. Some of these men have had few wins in their careers but the thrill of winning at Daytona in February or July can complete a racers career even if thats the only win they ever have. You have to expect the unexpected at Daytona and you can never count anyone out until the checkered flag waves in the air.

The Nationwide Race on July 6th 2013 reaffirmed everything I’ve mentioned. When I saw Kurt Busch driving the number 1 City Chevrolet it gave me that feeling of loving Daytona. He raced this car as a tribute to the movie Days of Thunder which starred Tom Cruise and Robert Duvall. They took a lot of real life incidences and put them into this great movie.

Racing at Daytona is exciting, unpredictable and fun to watch. Whether it be in huge pack or two car tandems you don’t want to blink because you never know what is going to happen next. I love Daytona. Daytona is famous, fierce, fast and fearless.  Names like Petty, Earnhardt, Yarborough, Allison, Jarrett, Waltrip, and Gordon have been dominant at this track and when they weren’t an unexpected driver was celebrating in victory lane.

I love Daytona! What’s not to love? It’s the real fast and furious.