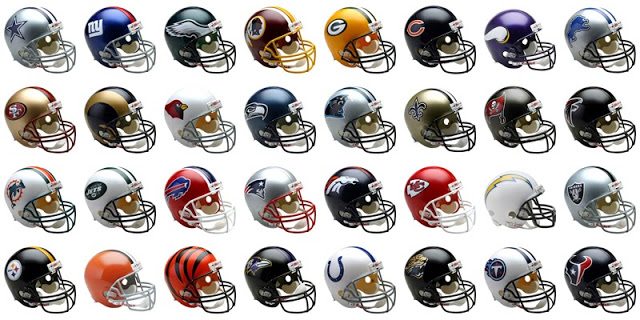 The time is upon us. The time of year every year that millions look forward. It’s the sign that the kids are back in school, NASCAR is coming to an end and the long baseball season is headed into the playoffs. The 2013 NFL Season is upon us and I am ready for it as well as the rest of you should be. For the first week I am just going to highlight the team I think that is going to win in bold and italic. This preseason has not done much for me and as I said to reader last week, I don’t feel like there is a heavy favorite going into this season. I think this will be unpredictable season with lots of surprises and upsets. With that being said here are my predictions for week 1:
Thursday, Sept. 5
Baltimore Ravens at Denver Broncos, 8:30
Sunday, Sept. 8
New England Patriots at Buffalo Bills, 1
Seattle Seahawks at Carolina Panthers, 1
Cincinnati Bengals at Chicago Bears, 1
Miami Dolphins at Cleveland Browns, 1
Minnesota Vikings at Detroit Lions, 1
Oakland Raiders at Indianapolis Colts, 1
Kansas City Chiefs at Jacksonville Jaguars, 1
Atlanta Falcons at New Orleans Saints, 1
Tampa Bay Buccaneers at New York Jets, 1
Tennessee Titans at Pittsburgh Steelers, 1
Arizona Cardinals at St. Louis Rams, 4:25
Green Bay Packers at San Francisco 49ers, 4:25
New York Giants at Dallas Cowboys, 8:30
Monday, Sept. 9
Philadelphia Eagles at Washington Redskins, 7:10
Houston Texans at San Diego Chargers, 10:20

Here the odds from vegasinsider.com