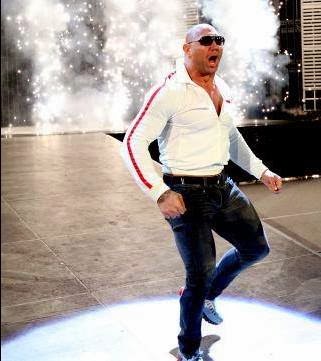 By: Holly Erickson
With the development of new technologies and social media,
the Internet Wrestling Community (IWC) is bigger in professional wrestling than
ever before.  Generally, there are always
multiple opinions to the same argument, and you will never make everyone
happy.  However, there seems to be one
common consensus among the members of the IWC; Batista’s return thus far has
sucked ass.
Now before you make any assumptions, I am not one of the “Batista
haters”.  When I first heard that Batista
was coming back to the WWE, I squealed like a little kid at Christmas time.  Growing up, Batista was one of my
favorites.  Hell, he used to be the
background on my family computer (much to the dismay of my mother).  I was so excited to see one of my favorite
wrestlers of all-time come back and kick ass like only the animal knows how.
Only, that’s not how it has gone down.  Since his music hit last week, and he came
out to confront Randy Orton, Batista’s comeback has been mediocre at best, if
not way below par.  Since coming back, he
has been sloppy in the ring and unprofessional outside of it.  His charisma has tanked since the last time
he was an active superstar, and his in-ring skills mirror that of a 50-year old
has-been who hasn’t taken a bump in years.
I haven’t seen any positive opinions going around through the IWC about
Batista’s return.  In the last week he’s
been here, he has done nothing but left a bad taste in my mouth.  It breaks my heart to say that, coming from
someone who was once one of his biggest fans.
In a similar fashion to Jeff Foxworthy’s “You Might be a Redneck”, here
is a list of “Your Comeback Might Suck Ass.”
Your comeback might suck ass if:
1.  The outfit worn the day of your comeback is
compared to what a teenage boy would wear before hitting puberty.
2.   The fans boo you during your match when you are
supposed to be a face.
3.    Not only are the fans booing you, but they are
cheering for a different guy during your match that isn’t even in your damn match.
4.    A woman does a better spear than you do.
5.    The boos resonating through the crowd after you
win your comeback match almost deafen your theme music playing in the background.
All I have to say is that I hope Batista gets his shit
together, the WWE gets their shit together, and the program stops being shit.  Start listening to the fans and giving the people what they WANT to see.  You can’t make everybody happy, but the general consensus is that the fans do NOT want Batista in the main event at Wrestlemania.  We are not your whores; do not shove things down our throats that we do not want.
Please Share This