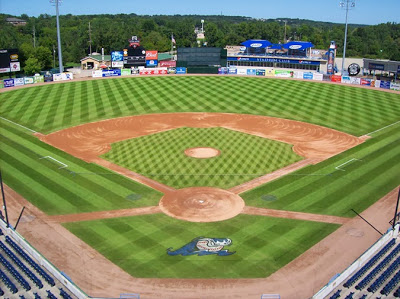 As the old saying goes,”You don’t appreciate what you have until it’s gone.” Today when the fire broke out at Fifth Third Ball Park just outside of downtown Grand Rapids, it made me realize how lucky we are. We are lucky that cities like Grand Rapids who aren’t big enough to have a pro sports team have such a great sports town with multiple sports teams. Grand Rapids has been home to the Whitecaps for 20 years and the Griffins for 18 years. At one time we had the Grand Rapids Rampage and Grand Rapids Hoops. In today’s economy it is difficult for the average American to go to a Detroit Tigers or Detroit Red Wings game with the cost of tickets, gas and food.  In Grand Rapids, we have baseball and hockey right in our backyard.

In the 20 year history of the West Michigan Whitecaps, the fans have seen a lot of players grow and move on to the big leagues. Some of those names include Omar Infante, Fernando Rodney, Brandon Inge, Ryan Raburn, Brennan Boesch, Jair Jurrijens and many others. Fans have even packed the stadium to see Magglio Ordonez, Kenny Rogers, Curtis Granderson and Jeremy Bonderman make rehab starts before returning to the Tigers. The Whitecaps have even been on Travel Channel’s “Man v. Food” for their Fifth Third Burger. Adam Richman showed up the stadium and conquered the feat. The Whitecaps were originally an affiliate of the Oakland Athletics from 1994 to 1996. In 1997, the officially became the affiliate of the Detroit Tigers.

Fifth Third Ballpark is not completely gone but it does make me grateful for the local sports that surround the Grand Rapids area. I personally would like to thank all the firefighters who worked so hard to get things under control and doing so under very dangerous conditions with the cold weather. There is no timetable for when repairs will start and be finished. I hope this will make people more aware and grateful of what they have and how local sports does a lot for the community. Fifth Third Ballpark will be whole and strong again, so will the players who play for the Whitecaps and the fans who come out to support them.