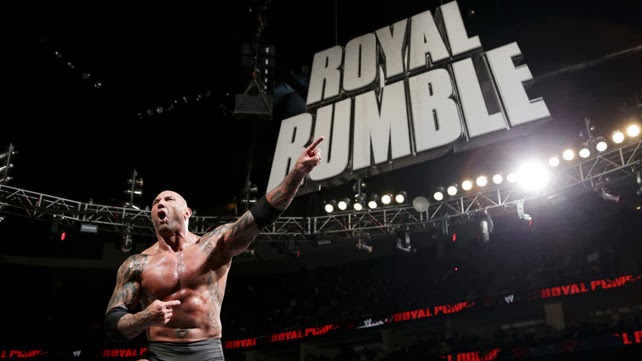 Tonight was the 2014 WWE Royal Rumble and considering it’s the beginning of the Road to Wrestlemania 30 WWE really dropped the ball big time. Here are the results of the Royal Rumble match.

-WWE World Heavyweight Champion Randy Orton def. John Cena
-Brock Lesnar def. Big Show
-Bray Wyatt def. Daniel Bryan
-The New Age Outlaws def. WWE Tag Team Champions Cody Rhodes & Goldust (Kickoff Match)
I always start off with what I do like the follow it up and it is going to be short because this pay-per-view absolutely sucked. I did like the Bray Wyatt and Daniel Bryan match to open the show. Even though the story has come to an end both men showed why they should be at the top. The preshow was also great to watch. The New Age Outlaws captured the tag team titles for the 6th time by defeating the Rhodes brothers. My top 3 rumble performers would have to be Roman Reigns, Sheamus, and Antonio Cesaro. All performed well and stayed physical the whole time they were in there. Congratulations to Roman Reigns who had 12 eliminations and broke Kane’s record for 11 eliminations in a single rumble match.  Like I said the good stuff is short but unfortunately not very sweet tonight.
I don’t like how after four years of being gone that someone can waltz right back into a main event spot at Wrestlemania. Batista has looked horrible in his two appearances back and has no love from the fans right now. Big Show and Brock Lesnar made Goldberg versus Lesnar from Wrestlemania 20 look like a classic. This was a complete waste of time, effort and booking. How can Big Show be looked as a monster again? Brock’s F-5 was about the only good thing in the match.
If I never see another Orton versus Cena match again I will be so happy. These two have had the spotlight long enough and it’s time to move over. There are guys like Daniel Bryan, Roman Reigns, Big E Langston and others who are getting great reactions and need to be thrown into the main event picture immediately. If I would have been at the Royal Rumble tonight I would have walked out as soon as Rey Mysterio entered. WWE could have called an audible and put Daniel Bryan in the match. His name was chanted the whole night and WWE ignored it.
There is 70 days until Wrestlemania and if they want to have a strong showing I’d be rethinking the way they are currently booking things right now. It is now too predictable on the matches that will happen at Wrestlemania 30. This Wrestlemania needs to be about the new guys and the future, not the old guys and legends that keep coming back.
I am giving this Royal Rumble a 3 out of 10. It wasn’t a rumble. It was a complete fumble. It’s now time for the Road to Wrestlemania 30. Hopefully the end of the road will be better then it’s beginning.
For more of Hollywood Joe’s opinions on WWE, TNA, and ROH be sure to check out Smarkasses with he and co-host Jordan Francisco