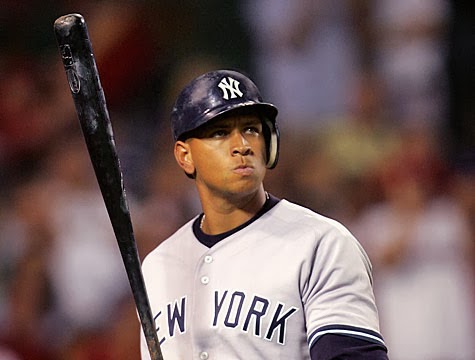 Alex Rodriguez has admitted to using steroids before when he was playing with Texas Rangers. Last year he was revealed as a client in the Biogenesis Scandal.With the overwhelming evidence against him Major League Baseball decided to suspend him for 211 games.  On January 11, 2014 after arbitration his suspension was reduced to 162 years which would keep him out entirely for 2014.

Alex Rodriguez is planning on taking this federal court to appeal the decision which undoubtedly cost MLB a lot of money. A lot of teams, and pitchers of those teams have stated they will have no problem throwing at A-Rod once he returns. I have been asked the question a lot lately. Should pitchers be punished for throwing at at Alex Rodriguez? In my opinion they should not be punished. Most of the players today are clean and have stayed clean due to the strict rules of MLB’s drug policy. There were 13 other players that were on the biogensis and all of them took their 50 game suspensions like men and dealt with it.

Alex Rodriguez made 29 million last year alone and that is more then the entire Houston Astros team put together. So explain this. Why is A-Rod above everyone else? What makes him more important then anyone else in the game? I could see why a pitcher would be offended at his actions and how they feel he is cheating the game and trying to get away with it.

I truly believe that guys like Bonds, A-Rod, Sosa, McGwire and others should have steroid era in parenthesis by all the numbers and records they have. If the Federal Government over rules what Major League Baseball has done with A-Rod’s punishment other players will try to cheat and use A-Rod’s case as a precedent of why they shouldn’t be punished either.

Whether Rodriguez comes back in 2014 or 2015 pitchers have said that he and the Yankees better take notice. If Alex Rodriguez doesn’t retire in the next few years I think he will be driven out by those who he has made enemies with. A-Rod will eventually be gone from baseball and when he is hopefully it will be the last of the steroid era. For now we will have to deal with it as baseball fans and the backlash that comes from it.