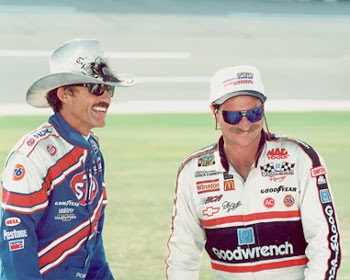 In 1964 Richard Petty won his first NASCAR Sprint Cup Championship and in 1994 Dale Earnhardt won his last championship. For 30 years two men dominated the race track along with a host of others like Darrell Waltrip, Cale Yarborough and David Pearson. Petty and Earnhardt each won 7 championships in that 30 year period which meant their dominance in the sport. Over the last decade NASCAR has been dominated by one man and that would Jimmie Johnson. Many have asked should Jimmie Johnson be put in the same category is Earnhardt and Petty since he now has six championships? If history is any indication then the answer would be no.

The Chase for the Cup began in 2004 which had a cut off period at the last ten races. In the beginning the top 10 drivers in the points standings would go on to compete for the championship with the points resetting. Over the last couple of years NASCAR has changed their scoring format and the amount of cars in the chase. It has been proven that if NASCAR ran under the old points system since 2004 then Jimmie Johnson would only have three titles, not six. Here is how it would have looked:

As you can see no one would have won back to back years in a row. Now we fast forward to 2014. Not even a month ago NASCAR made changes to the Chase for the Cup and is officially calling it the NASCAR Sprint Cup Chase Grid. It was start off with 16 drivers. The Chase grid will be divided into four rounds.

-The Eliminator Round (races 33–35)
33 Goody’s Headache Relief Shot 500 Martinsville Speedway, Ridgeway October 26
34 AAA Texas 500 Texas Motor Speedway, Fort Worth November 2
35 Quicken Loans 500 Phoenix International Raceway, Avondale November 9
Starts with eight drivers, each with 4,000 points.
-The NASCAR Sprint Cup Championship (final race)
Ford EcoBoost 400 Homestead-Miami Speedway, Homestead November 16
The last four drivers that are at the top of the points will start the race at 5,000 points, with the highest finisher in the race winning the Cup Series title.
Now I don’t about everyone else out there but I think this was designed to see more people win championships and to see less of Jimmie Johnson. A lot of old school NASCAR fans do not want to see him tie or beat the record that Earnhardt and Petty share. Watching the same guy win every year eventually gets old and boring which eventually causes the sport to lose money due to lack on interest. It’s been said many times on NASCAR TV that sport has lost money over the last decade. Maybe the NASCAR Championship Grid will solve a lot of problems and bring a bigger interest into the sport.
Tune to the 2014 NASCAR Season which is just getting started. Be sure to check us out for any NASCAR newsworthy topics throughout the year.
Please Share This