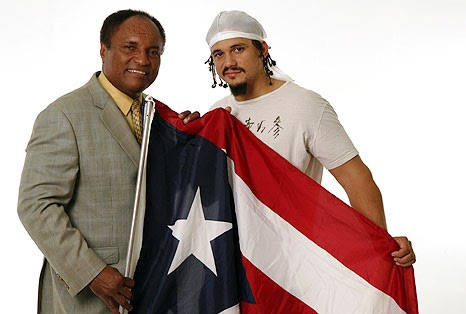 Most people of this generation might not know who Carlos Colon Sr is but to many of us who have studied the rich history of pro wrestling he is the father of wrestling in  Puerto Rico. Carlos Colon’s career spanned over 40 years as a wrestler and now has his legacy being continued through his family. His sons have performed in WWE as Carlito and Primo. His nephew also wrestles as Epico or if you want to be politically correct Primo and Epico now wrestle as the Los Matadores.

Aside from all of that Carlos Colon was the face of the World Wrestling Council. He had 64 title reigns in his time in WWC. He faced such men like Randy Savage, Ric Flair, Bruiser Brody, Stan Hansen, and Abdullah the Butcher. He has over 70 scars on his body and has said that most of his bloodshed came from Abdullah and all the brutal matches they have had.

Carlos Colon has had a great impact in Puerto Rico when it comes to professional wrestling. He and Carlito continue to run the WWC occasionally and still bring great pro wrestling show to the country. A lot of people have criticized WWE’s choice for putting him into the hall of fame but if it weren’t for Carlos Colon we would not have some of the great talent we do today. He always made guys better then what they were before they came to Puerto Rico.

Lastly, Carlos was so big in the industry he did win the NWA Heavyweight title at one point defeating Ric Flair for the title. It’s never been officially recognized by the NWA but the fact that it happened in his own country proves how legendary and how much of an impact this man has had on pro wrestling in a different country. Congratulations to Carlos Colon Sr. on his upcoming induction into the 2014 WWE Hall of Fame.