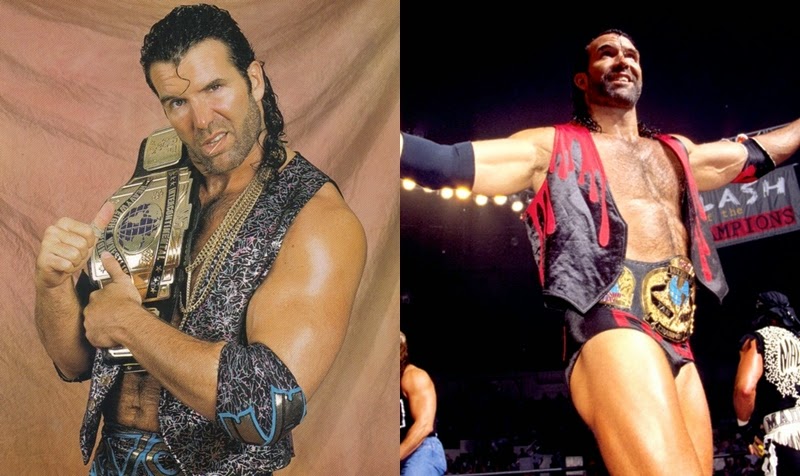 Hey Yo! Say hello to the newest and final member of the 2014 WWE Hall of Fame. For many years the name Scott Hall has been synonymous with many great wrestling moments. Early on his career he teamed with the Curt Hennig in the AWA as a formidable tag team that went on to become the tag team champions. He hung around the NWA after his AWA as Diamond Studd where he became friends with Diamond Dallas Page. However his career was just beginning.

In 1992, Scott Hall made his WWE debut as “The Bad Guy” Razor Ramon. My first memory of Razor Ramon that impacted me was the 1992 Survivor Series. He teamed with Ric Flair to take on Randy Savage and Mr. Perfect. I knew after watching that match that he was for real. He went to have great feuds with Shawn Michaels, Diesel(Kevin Nash), 1-2-3 Kid(Sean Waltman/X-Pac) and Jeff Jarrett. He is most known for his match at Wrestlemania 10 with Shawn Michaels that revolutionized the ladder match. The other thing that he’s known for is the famous curtain call at Madison Square Garden. He and Kevin Nash were leaving for WCW and they hugged Triple H and Shawn Michaels in the middle of the ring. That was something that broke from tradition.

That tradition that was broken led to one of the biggest moments in pro wrestling. Scott Hall and Kevin Nash showed up on WCW television to begin their formation of n.W.o. with Hulk Hogan. Scott Hall was making a lot of money and had a lot of success. Unfortunately with that success the demons of Scott Hall were surfacing. Scott Hall had a lot of drug and alcohol problems that went for a very long time. There were times when I was reading pro wrestling news I was going to read that Scott Hall was dead. However in 2013 he received help from his long time friends Diamond Dallas Page and Jake the Snake Roberts. He has been clean and sober since and has had a great relationship with his son Cody Hall. Scott Hall and Jake Roberts two examples of someone who can come back from the deepest parts of hell and be rewarded for overcoming the odds. Now they have a story to tell and share that story with all they have been through.

Congratulations to Scott Hall aka Razor Ramon on his induction to the WWE Hall of Fame. This is definitely one more for the good guys.