On April 6th, 2014, history will be made at the Superdome in New Orleans. It’s Wrestlemania 30 where it has always been dubbed the “Showcase of the Immortals,” and “The Grandest Stage of Them All.” How ironic that arena that has hosted so many NFL Super Bowls in the past will get it’s biggest event yet. There are eight match on this years Wrestlemania and all of them look very solid. All of them have major importance and all of them will begin to establish the future while honoring the work and dedication of those in the past. 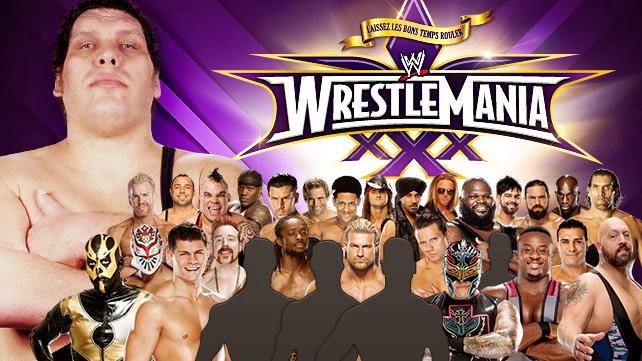 30- Man Andre the Giant Memorial Battle Royal
I am very happy that 99 percent of the talent on the roster is being used in Wrestlemania this year and what better way to use a chunk of them by honoring the greatest legend of them all. Anyone can this Battle Royal but I believe on principal that the winner will be Big Show. Many have compared him to Andre and obviously he is the modern day giant. 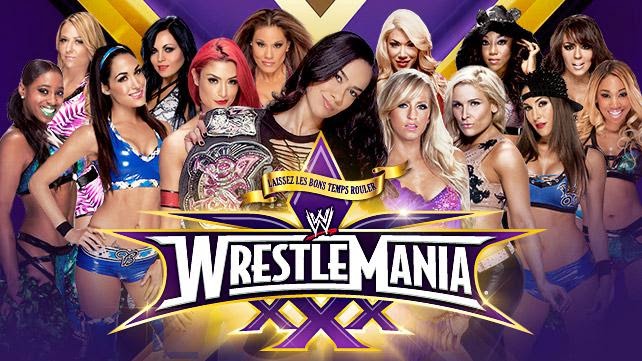 Vickie Guerrero Diva’s Invitational for the WWE Divas Title
AJ Lee has been champion for a long time now. We have not seen dominance in the Divas division since the days of Trish Stratus, and Lita. I see three options for this match. I see Tamina winning and turning on AJ. I see the one Diva the truly deserves it win it and that would be Natalya. Lastly, I could see Brie Bella winning it and having a new power couple in WWE if you know what I mean. Either way you slice it I do not see AJ walking out of Wrestlemania 30 the WWE Divas Champion. 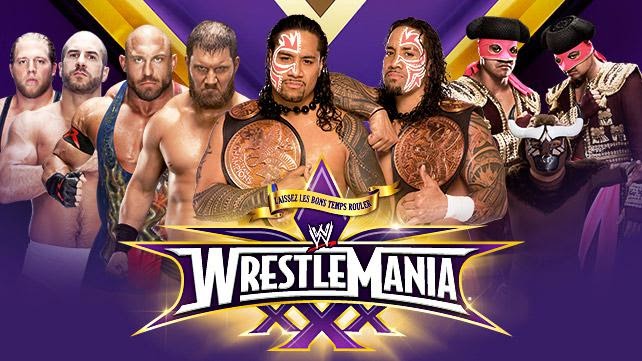 Fatal Four Way WWE Tag Title Match: The Uso’s(c) vs. The Real Americans vs. Ryback/Curtis Axel vs. Los Matadores
The Uso’s have not held the titles long and they worked long and hard to get a title reign under their belts. However it seems like the crowds are fully behind The Real Americans. They teased a split between the Real Americans for awhile but that has died down. A lot of people feel Cesaro and Swagger should have had the titles by now. The only way I see Jimmy and Jey drop the tag titles is if it’s to The Real Americans 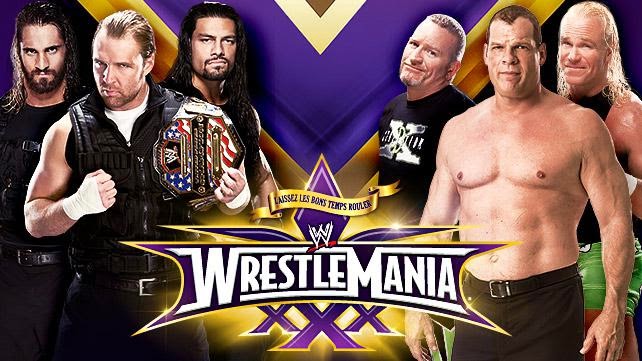 The Shield vs. Kane and The New Age Outlaws
We all know The Shield has to break up eventually but I believe this will be their last great moment together as a unit. Wrestlemania is a time to breakout and build a future. They debuted last year at Wrestlemania 29 but at Wrestlemania 30 they will make their mark as a group one final time as well as individuals. All three members at one time or another has been teased to be the breakout star but on this night all three of them will have breakout performances against three great veterans. 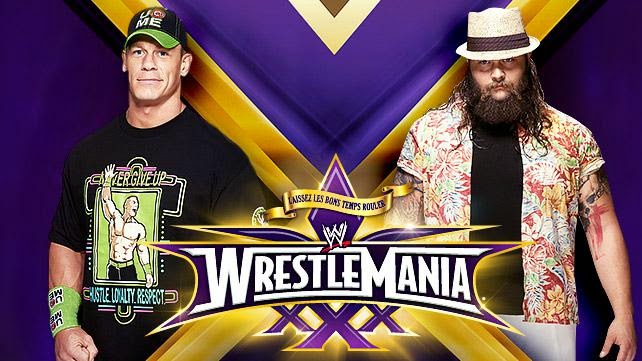 John Cena vs. Bray Wyatt
Nine years ago at Wrestlemania we heard the song My Time is Now which has been synonymous with John Cena since then. At Wrestlemania 30, Bray Wyatt’s time is now. Even if Cena does win the match we are going to see the very best of Bray Wyatt and his future will be built. He has been one of the best things the WWE has done creatively in a very long time. John Cena is nearing the end of his prime and WWE needs to let him start giving the ball to other stars and letting them run with it. 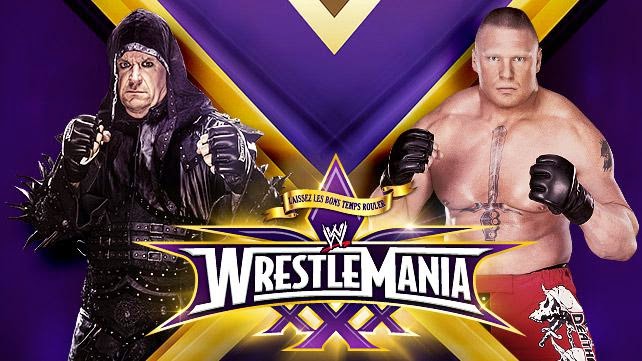 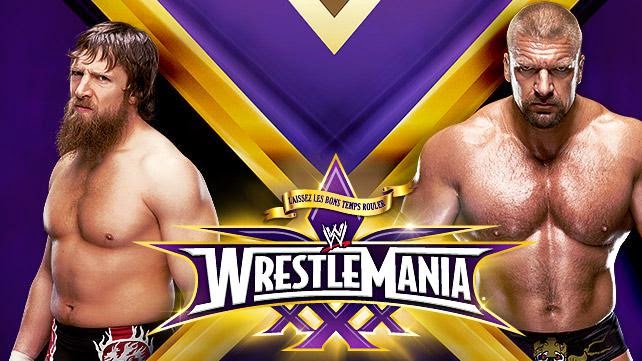 Daniel Bryan vs. Triple H- Winner Advances to the WWE World Heavyweight Title Match
The set up has a feel similar to Bret Harts journey at Wrestlemania 10. The only difference is that Daniel Bryan will not lose his first match. There is no doubt this will be a phenomenal match because it’s two of the best in ring performers in WWE history. WWE is righting the wrongs of some of their creative and storyline mistakes with Daniel Bryan. Triple H as a performer and COO realizes that guys like Orton and Cena aren’t going to be around much longer and that the future needs to start now. That future is now and that future starts with Daniel Bryan beating Triple H and moving on to the main event. 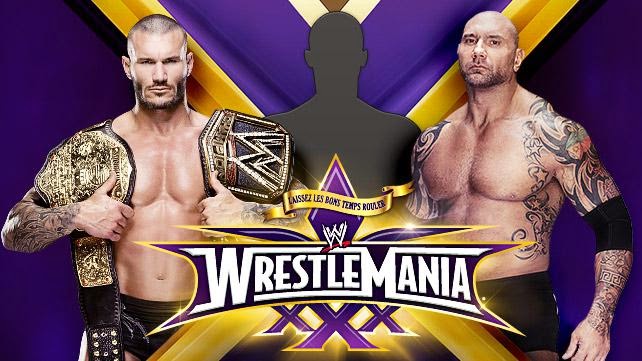 WWE World Heavyweight Championship Match: Randy Orton(c) vs. Batista vs. Winner of Daniel Bryan/Triple H
There is no doubt in mind it will be Daniel Bryan in the triple threat match. The right way to end Wrestlemania 30 is for Daniel Bryan to win the title and for 80 thousand fans to chant YES! YES! YES! They should acknowledge that Daniel Bryan is the hottest thing they have had since Stone Cold Steve Austin. Any other ending is unacceptable. Orton has had his time and Batista is not the same performer that he was in his first run. It’s Daniel Bryan’s time and it’s the time of the YES Movement.
Wrestlemania 30 will honor the legends of the past and build the stars for the future. Let’s not forget that Hulk Hogan is the host of Wrestlemania 30 so who knows what craziness will occur under his watch. Let’s not forget the 2014 WWE Hall of Fame either. This is one of the best classes that we have ever seen. 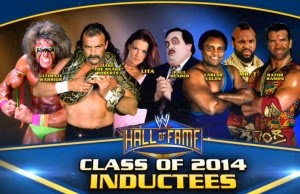