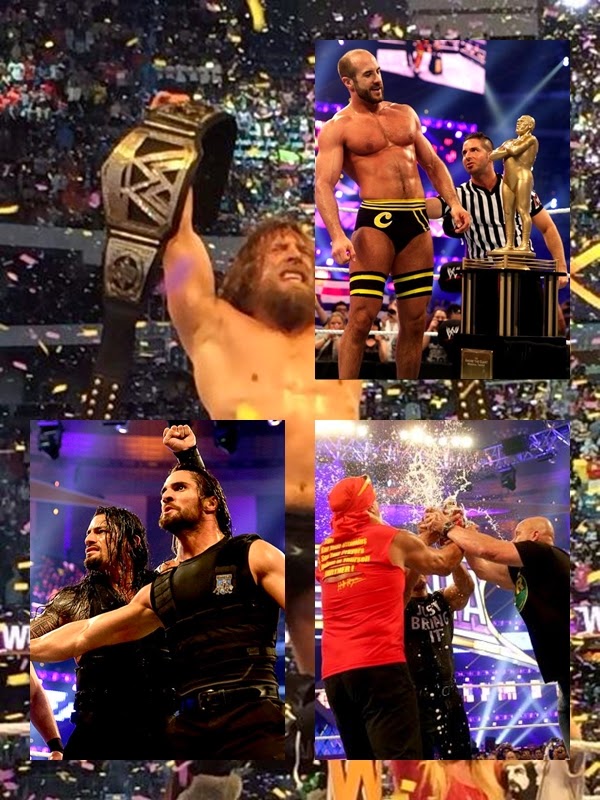 For the first time in a long time I do not know where to even begin. I am just going to start with the most obvious thing and get it out of the way. I have never been a huge fan of The Undertaker but I have always respected what he has brought to this business. I am not sad that the streak or The Undertaker’s career has ended. I am disgusted at who brought it all to an end. Brock Lesnar does not care about the pro wrestling business and is not a face of the future. If it was Mark Callaway’s decision to end his career and character I hope someday we get an explanation as to why he picked who he did. I do not want to focus on the only negative part of the show because one match in the end is not the entire show.

The show opened with Hulk Hogan, Stone Cold Steve Austin and The Rock honoring each other along with all the past legends that have been apart of Wrestlemania. These three are really the three biggest mega stars in the history of WWE and the pro wrestling business. It was great to see the past legends honored but I love how they acknowledged that it was time for the future to shine.

Tonight started the building process for the future. The opening match between Daniel Bryan and Triple H told a great story. It reminded me of the Austin-Rock match from Wrestlemania 15 when Austin took on the entire corporation. Daniel Bryan had the deck stacked against from the beginning but Triple H made the right decision by putting him over and building for the future. However this is not the last we would see between Triple H and Daniel Bryan in the evening.

The Shield is another group of men that will be the future of the WWE and that was very evident on the show. Even if they break up The Shield it proved that Rollins, Reigns, and Ambrose are there for the long haul. I thought it was cool that the veterans let them shine.

Speaking of shining and building for the future. What a great night for Cesaro and his career. He broke off from Jack Swagger after they failed to capture the tag titles in the fatal four way tag team title match. Then he goes as an unannounced participant into the Andre the Giant Memorial Battle Royal and wins. His future, and his career in WWE are a lock for a long time to come and I am glad they are using this to build him. I also thought it was great that Big Show brought back the single strap singlet in honor of Andre. Big Show was very classy all around.

Even though Bray Wyatt was the only young guy that didn’t win he had one hell of a performance tonight and his passion for the business was felt and shown. I think The Wyatt Family is going to go down as one of the all time greatest stables in WWE history. They are different from The Shield in the sense that all of their characters are connected whereas if you split The Shield up you have three separate identities that can go on their own

The Divas match was not long and nothing really stood out for me personally. I was really hoping to see Tamina turn on AJ but they never interacted once. I was hoping for a Naomi, Natalya, Brie Bella or Tamina win at Wrestlemania 30.

The Main Event was better then I expected. I think all three men knew they had to bring their A game and they did. I have been very critical of Batista since his returned but he really stepped it up tonight along with Randy Orton. In the end, I am so happy WWE righted the wrong of what they have been doing for the last eight months with Daniel Bryan. I love the fact that Triple H and Steph played a role in the match and got taken out. All the factors of the storyline and all the obstacles that have been put in Daniel Bryans way were played out in this match. Wrestlemania 30 ended the way it needed to end and that’s with a huge celebration.

The Showcase of the Immortals and the Grandest Stage of Them All was epic and had a lot of great storytelling tonight. The past was honored, the future was built and a legend came to an end. I want to leave you with this. If you think one match ruined wrestling, ruined WWE, and ruined Wrestlemania 30 go back and watch it and skip through that match and then give me your opinions. Yes it was emotional and shocking but isn’t that what we have been begging for since the Attitude Era ended? I will continue to watch WWE, I will continue to be a fan and I will not let one match dictate my opinion of the show. The was a 9 out of 10 for me and quite possibly the best show WWE has put on in the last 5 years. Tonight was truly a night that will be remembered forever and my love for the wrestling business will continue on with the future starts of WWE. Thank you WWE for 30 years of greatness and special moments that will last a life time.