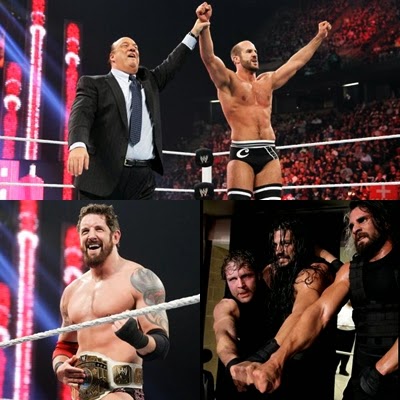 Tonight was the 2014 Extreme Rules show and before I begin here are the results:

Daniel Bryan (c) def. Kane (WWE World Heavyweight Championship Extreme Rules Match)
Paige (c) vs. Tamina Snuka (Divas Championship Match)
Bray Wyatt def. John Cena (Steel Cage Match)
The Shield def. Evolution (Six-Man Tag Team Match)
Bad News Barrett def. Big E (c) (Intercontinental Championship Match)
Alexander Rusev def. R-Truth & Xavier Woods (2-on-1 Handicap Match)
Cesaro def. Rob Van Dam & Jack Swagger (Triple Threat Elimination Match)
El Torito def. Hornswoggle (“WeeLC” Kickoff Match)
Now I can honestly I couldn’t find one thing wrong with this show. I am not going to say this was the greatest pay per view of all time but I didn’t see anything to terribly bad with it. It was a very solid show that followed up on what Wrestlemania 30 delivered. The future is in the process of being built and it kept the process going to night with Cesaro, The Shield, Paige, Rusev and Wyatt. I enjoyed all the matches especially The Shield vs. Evolution. I am going to say that was the match of the night. I think all three members of The Shield are going to go on to do big things.
Bray Wyatt, Cesaro, and Rusev are all animals in their own respects. Wyatt with his character, Cesaro with his strength and Rusev with his style. All three are future World Champions and Main Event Stars. Over the next few years I expect big things from them.
On a final note, I am afraid I’ve got some bad news. Bad News Barrett is the new Intercontential Champion. This is a guy who has had so much bad luck but is now finally turning the corner. I really think he is another guy if he can stay healthy could be a future World Champion. I am not sure where Big E goes from here but his character and momentum got really stale. I guess he’s not what the people want right now.
Extreme Rules was very solid. Daniel Bryan defied the odds, The Shield proved to dominant and the youth movement of WWE continues. A great show with very solid matches. I will give it a 7.5 out of 10.
Please Share This