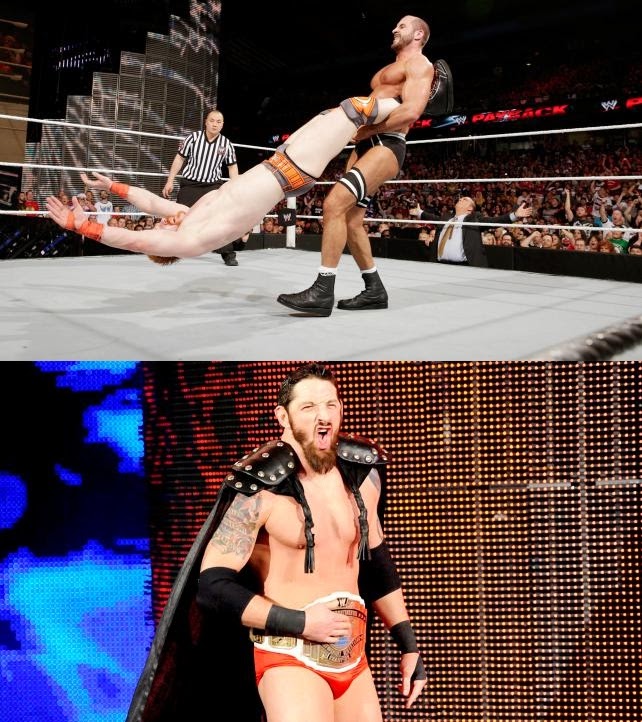 Tonight was the WWE pay-per-view known as Payback which took place in Chicago. I thought for sure going into this pay-per-view that there would be a lot of CM Punk chants. There were some but not a lot. Paul Heyman and Stephanie McMahon made reference to him during the show to get some heat for themselves. Overall I thought the show was pretty decent. Here are the results.

-Kofi Kingston vs. Bo Dallas ends in a No Contest after Kane attacks Kingston
-Rusev def. Big E
-Ryback & Curtis Axel def. Cody Rhodes & Goldust
-Sheamus (c) def. Cesaro (United States Championship Match)
-El Torito def. Hornswoggle (Mask vs. Hair Kickoff Match)
I always start of with the things I don’t like first so with that being said I was disappointed with RVD tonight. I really think RVD has lost a few steps in his time. I believe Barrett deserves more credible and more in shape opponents. RVD vs. Barrett would have been great five years ago but not now. Barrett goes over strong in this match but I hope Barrett gets more durable opponents in the future. I also do not like the fact that they are making Big E job out when they spent all that time building him up to make him a big deal.
Someone they are making a big deal about is Cesaro. I love the matches he and Sheamus have against one another. I think Cesaro, Barrett and Sheamus should feud over the WWE World Title someday on European tour. That would be some classic stuff that the fans would eat up. Also if tonight didn’t prove it I don’t know what will but Roman Reigns is the future. The fact that The Shield swept Evolution out of the match they had showed that Triple H is indeed building for the future. I love the fact that a great wrestler has turned into a great business man. He knows he needs to do the right thing for the future.
I never thought I’d say this in a million years but John Cena’s match was the match of the night against Bray Wyatt. I love the craziness, the punishment and involvement from outside forces. I think Cena is starting to realize that his five moves of doom aren’t the trick anymore and he needs to be more innovative now against the new and young talent coming up. Major props to Cena and his performance tonight. I hope I can start praising John Cena a little more with matches like that.
All in all I would give the show a 7 out of 10. It was decently solid and didn’t have horrible matches. They just didn’t have epic moments like they should on pay-per-views. Glad to see the future is here and now.
Please Share This