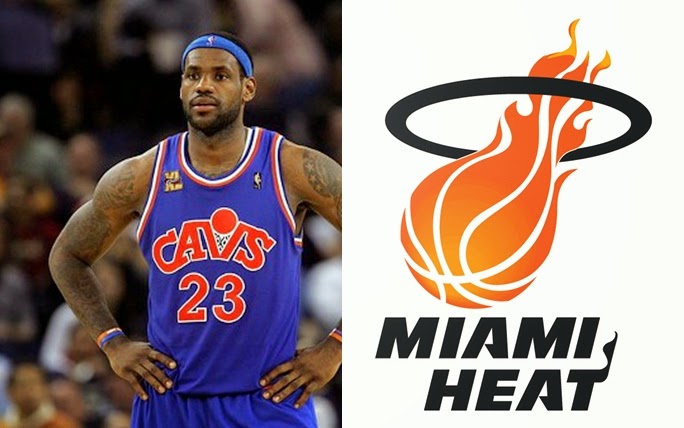 This past week LeBron James announced he was going  back to Cleveland which was not a surprise to me. Chris Bosh has resigned with Miami and Dewayne Wade is still undecided. Over the last four years since “the decision” was made LeBron James became the most hated player and the Miami Heat became the most hated team in all of American professional sport. All these claims of 6 and 7 championships and they only had two. They were out played and out classed by the San Antonio Spurs in this years NBA Finals.
In this offseason Miami has added Luol Deng but that’s it right now. The Cleveland Cavaliers have a young team with full of potential that LeBron can elevate but this isn’t the point of what I want to talk about. With LeBron James out of Miami are people rooting for Miami? Are people rooting for Cleveland or are people rooting for both? Do people want to see Miami win multiple titles without LeBron or does the nation of basketball fans want to see a championship in Cleveland?
Basketball fans across the country have been passionate about LeBron, the Miami Heat, the big 3 and even the Cleveland Cavaliers now. Some say the Heat are going to suck and are going to be one of the worst teams in the league. Others say they love the big 3 and will always be LeBron supporters. Those LeBron fans are now supporting the Cavaliers and want to see the championships come to Cleveland.
There are so many questions and I am sure NBA fans will have their answers. Here is something to think about and that would who are you going to root for if it’s the Cleveland Cavaliers vs. the Miami Heat in the Eastern Conference Finals next year? I personally will be curious to see the reactions from fans regarding both teams and how they are perceived. Cleveland or Miami? LeBron or no LeBron? Who do you side with?
Please Share This