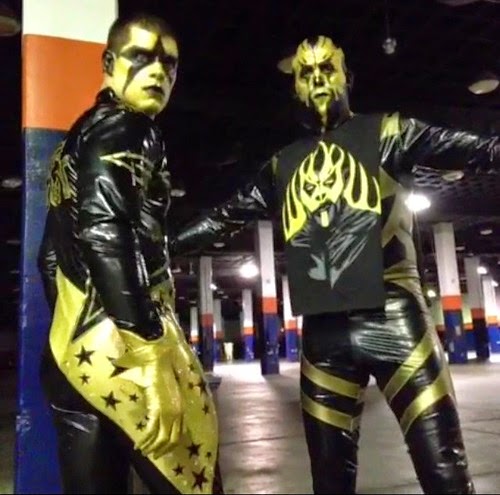 For as long as I have been a wrestling fan the names Rhodes has been synonymous with pro wrestling. During my younger years I remember Dusty wearing the polka dots in WWE and watching “The Natural” Dustin Rhodes on WCW Saturday Night. Before I was born in 1985 “The American Dream” Dusty Rhodes was already a legend but growing up and now into adulthood I spent time watching Goldust and Cody Rhodes.
Goldust broke on to the WWE scene in 1995. He was edgy, controversial and pushed the envelope. I don’t think people even realized it was Dustin Rhodes at first. He did spend time in WCW and TNA over the last 20 years but his legacy as Goldust in WWE is what he will be most remembered for. In the modern era Goldust is just a fun loving goofy character who is helping the younger talent learn and bloom. One of those younger talents is his own brother.
Cody Rhodes showed up on WWE television  in 2007 teaming with Hardcore Holly. After a short time he turned heel and teamed with Ted Dibiase Jr. They eventually joined Randy Orton and created Legacy. After his time in Legacy he wore a plastic mask after his nose was broken and called himself “Dashing” Cody Rhodes. His character was obsessed with his looks and put bags over peoples heads. He is credited for bring back the old school Intercontinental Title. Once his Intercontinental Title run was over he grew his mustache out and teamed with Damien Sandow. They called themselves Team Rhodes Scholars and had a lengthy run as a tag team but never won the gold together.
It was around this time last year Cody turned face and began a different direction. He feuded with “The Authority” which brought Dusty Rhodes and Goldust back to television. They eventually won the WWE Tag Titles and some great matches in the tag team division. In recent weeks Cody Rhodes felt like he was dropping the ball and letting Goldust down. He told Goldust to find a new tag team partner and when Goldust failed with all of his partners Cody came back.
Cody didn’t come back as Cody Rhodes. He made his debut as Stardust which is a spin-off of his brothers character Goldust. As Stardust, Cody Rhodes mannerisms, in ring style and personality has totally changed. He proved he can adapt to any gimmick and add new things to his in ring style. The also can be said for Goldust. Dustin Rhodes as Goldust has added new things to his in ring style since his return. They are proving that teaming together is best for business.
Dusty Rhodes has a lot to be proud of with Dustin and Cody. They have made names for themselves in the pro wrestling business by working hard and not just riding the coattails of their dads legacy. I believe when it is all said and done both Dustin and Cody will be WWE Hall of Famers. They have learned to adapt and evolve and because of that the Rhodes brothers will be remembered for a long time to come.
Please Share This