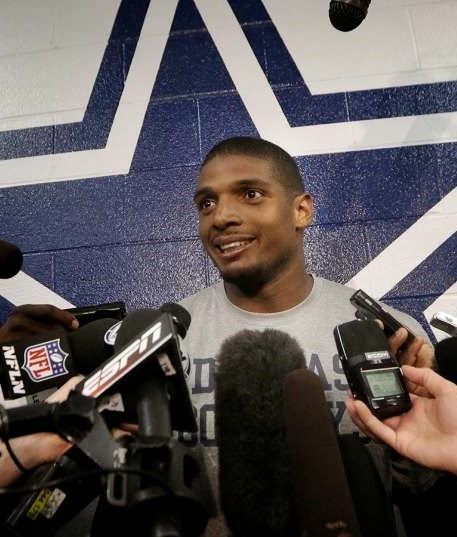 This past weekend Michael Sam was released be the St. Louis Rams. Earlier today the Dallas Cowboys signed him to their practice quad but before that happened the WWE announced an open invite to Michael Sam for an upcoming appearance on Monday Night Raw. Now that he is signed he won’t be on Raw anytime soon but the invite is on the table for the future. One has to wonder that if the Cowboys hadnt signed him if he would have shown up on WWE Television?
There have been a few athletes that have opened up about being gay. WWE’s own Darren Young is openly gay as well long time employee Pat Patterson. Other well known athletes include Brittney Griner, Jason Collins and Liz Carmouche. The UFC, WWE and NBA have been accepting of openly gay athletes in their organization.
Everyone keeps saying quit making a big deal about it and that it’s not about Sam being openly gay. Well if thats the case why isn’t he signed? These awards and highlights should speak for themselves:

He was projected as a third or fourth round projection before his announcement and the NFL Combine. He went in the 7th round with many citing his performances were disappointing in the combine but during his college career he had Sam had 123 tackles,(36 for a loss), 21 sacks, six forced fumbles and two intercepted passes. These are great stats and they shouldn’t have been ignored.

WWE has been known to capitalize on trends, topics and controversial issues and incorporate them into their television show. It just seems to ironic that WWE wanted Michael Sam on Monday Night Raw during the first Monday Night Football games of the NFL Season.

With all the facts, stats, and opinions out there it makes me wonder if the NFL is discriminatory or if WWE is taking a bad situation and making themselves look good and the NFL bad? There are so many questions but we will have to wait to find the answers because Michael Sam is a Cowboy and won’t be on Monday Night Raw anytime in the near future!