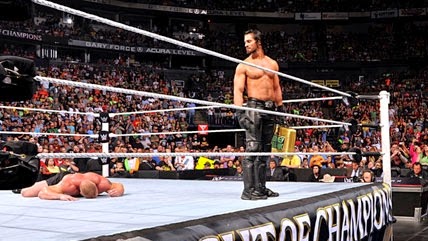 Before the night even got start the big news coming out of the weekend was Roman Reigns being rushed into emergency surgery for a bad hernia that was causing him a lot of pain. I honestly thought that his injury would change some things but it didn’t. The champions who won shouldn’t have and again they dropped the ball on pushing the future. It was a solid show with some pretty good matches but the ending was still the same. A part timer who doesn’t care about the business walks out with the gold. Here are the results and the reason for my frustrations tonight:

So The Miz wins a title and Cesaro doesn’t. What kind of logic is that. The Miz will never be a main eventer again and will not have the momentum he did in 2009 and 2010. Cesaro is a guy who is so marketable with his intellect and style in the ring. He and Sheamus have awesome matches so I cannot complain about that. I think WWE is using ass backwards logic lately. Lets put the titles on guys that no one cares about and screw the guys over that the fans are getting behind.
The highlight of the night for me was seeing Seth Rollins Curb-Stomp Brock Lesnar but they screwed that up too. Seth Rollins should have won the WWE World Heavyweight Title tonight. With Roman Reigns and Daniel Bryan sidelined with injuries this would have been a perfect night to alter the course WWE is on and build towards that future everyone keeps talking about. If the future keeps being put off, then no one is going to care when it happens. You have people on the main roster right now like Cesaro, Rusev, Rollins, Ziggler,and Sheamus who should be competing for the WWE World Heavyweight Title. Then in NXT you have Adrian Neville, Sami Zayn, Kevin Steen, Hideo Itami, Fergel Devitt, The Ascension and Charlotte who need to moved to the main roster and have the spotlight be put on them.
I was happy to see the Rhodes brother win the tag titles again. Even with all personal feelings aside I was getting sick of The Uso’s as tag team champions. They needed to lose so they can get in the hunt again and gain some momentum again. I love the AJ Lee and Paige feud but I hope they don’t swap the title back and forth every time they fight. Feuding over a title is great but the titles need some prestige and some importance. Dropping the title every four weeks doesn’t accomplish any of that.
I feel WWE didn’t accomplish a lot tonight. Maybe in another four weeks they will accomplish more. The next time WWE is on pay-per-view is October 26th in Dallas at Hell in a Cell. For now, I will give WWE Night of Champions a 6 out of 10. They won’t get a hire rating from me until the future is being showcased, highlighted, and pushed into the main event. It was a night of champions tonight but in for weeks it will be a night of hell for anyone who steps in the cell!
Please Share This