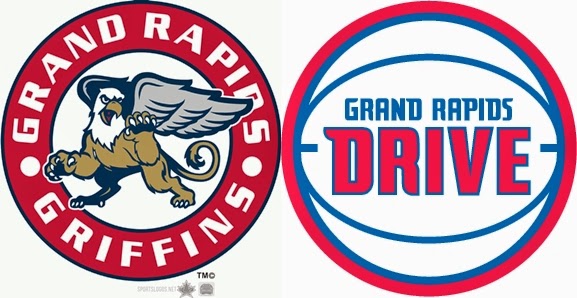 If you live in Grand Rapids Michigan in the winters usually the only sport to attend in the winter time is by going to Van Andel Arena to watch the Red Wings minor league hockey affiliate Grand Rapids Griffins. On November 26th the DeltaPlex will be the other facility that sports fans can flock to so they can enjoy a sport event. It was announced awhile back that Grand Rapids would be getting a NBA D-League affiliate team and they will be known as the Grand Rapids Drive. We have had the Hoops, the Flight and the Cyclones but none have ever been linked to the Detroit Pistons.
I believe this will make a huge impact in Grand Rapids due to the fact that the Griffins belong to the Red Wings and the Whitecaps belong to the Tigers. Over the years both minor league teams have produced talent that have went on to play in the NHL and MLB. This is a chance for Grand Rapids fans to see what to be vocal about who could be the future of the Pistons much like Grand Rapids have been vocal about talent that have played for the Whitecaps and Griffins over the years.
Like the Griffins and Whitecaps, the Drive will have affordable ticket prices ranging from 10 dollars to 30 dollars. They will also have theme nights and promotions that will be announced at a later dates. There will be plenty of chances to see the new Grand Rapids Drive Basketball Team during the 23 home games they will have in their inaugural season. There is no doubt in my mind on the handful of nights the Drive and Griffins both play at home that downtown Grand Rapids will be hopping and full of energy. The local sports bars and restaurants will benefit big time on the nights both teams play at home. Having two sports teams playing in the winter time will be great for the economy of Grand Rapids and the businesses around both the DeltaPlex and Van Andel Arena. Regardless if you’re a hockey fan or basketball fan it’s going to be a great year to be a sports fan in Grand Rapids Michigan.
For more info on the Grand Rapids Drive check them out at http://www.nba.com/dleague/grandrapids/
Please Share This