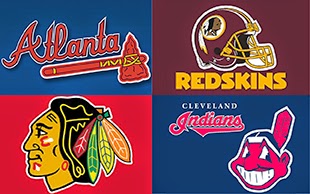 Over the last couple of years there has been a lot of controversy regarding the name of the Washington Redskins. The FCC has been targeting the Washington football team by taking away their trademark rights and now trying to ban broadcasters from using the name while referring to them. I take issue with the FCC’s actions on a couple of levels. The first thing is that there are three other professional sports teams with a Native American nature to them. Why isn’t the FCC targeting them? We have the Cleveland Indians, Chicago Blackhawks and the Atlanta Braves. No one is taking issue with the other three. Multiple polls done over the years show that Native Americans have no issues with the Washington Redskins name or any other team that has a Native American name to it.  Now there have been several Native American group who have taken issue with the name decided to take it to the federal courts but did not win due to lack of evidence of disparagement.
The other issue I have with this controversy is that the Washington Redskins were formed in 1932. If there was an issue with the name why wasn’t it addressed many years ago. Why didn’t anyone ask the previous owners to change the name? I understand that the name sounds derogatory and sounds hurtful but I don’t think that was ever the intention when the name and mascot were founded. There are so many factors to this controversy that if you take sides no matter what side it is there will be some sort out of outrage. If it were my decision I would come to some sort of agreement that if Washington uses the Redskin name that they should donate a portion of their merchandise and ticket sales to different tribes around the country. Use it to help with scholarships, employment, and to those are struggling in the economy.
I do believe that the FCC is going overboard with trying to change the name of something that’s been around for 80 years. I could understand if they were formed like 5-10 years ago but the Washington Redskin name is synonymous with the NFL and they have a fan base that has been very loyal over the years. On one final note I don’t think the founders of the Washington football team were trying to be racists and I don’t think the current owners are racists. I think they are trying to protect the tradition of their football team. On a personal note just because I agree with the Washington Redskin name it does not mean I am racist or prejudiced against anyone. I just wanted to clarify that before readers make any assumptions. Hopefully the Redskin controversy will be resolved quicker rather then later because quite frankly the NFL has bigger problems then a team name.
Please Share This