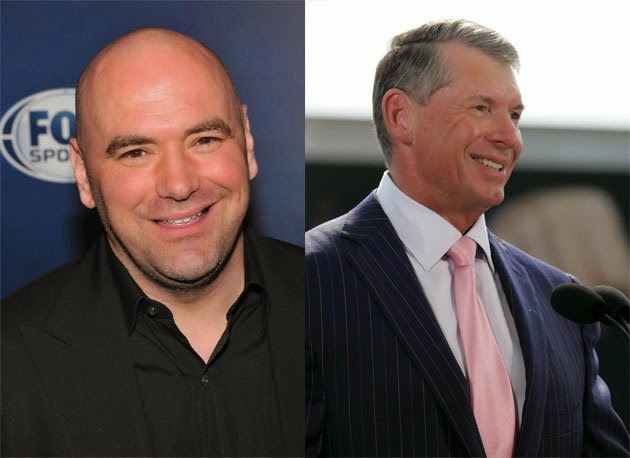 If you’re a true WWE fan then right now you’re probably upset that Brock Lesnar is WWE World Heavyweight Champion. He only appears part time and there are rumors he won’t reappear until January. That would make it four months without a  WWE World Heavyweight Champion. Lesnar’s WWE schedule is a lot like his UFC schedule was  Most top UFC fighters only twice, maybe three times a year which is a perfect chance for Lesnar to do both. The only way Lesnar would be able to do both is if Dana White and Vince McMahon agreed to share him. Dana White and Vince McMahon are friends and have respect for each other but they do not want to be involved with each others business. I believe both men should put their egos aside and agree to share the contractual rights to Brock Lesnar. There are reasons that would benefit both sides.
In the UFC the days of Chuck Liddell, Randy Couture, Tito Ortiz and many others are over. There are no more big named fighters with personality that you can market with. The fighters from 5-10 years ago made the sport standout and made you want to watch what was going to happen. When Brock Lesnar was in the UFC he was the most hated man in the company and people paid to see how he would do against one of their heroes. UFC really never had a hero before and really hasn’t had one since. Brock Lesnar. The numbers speak for themselves with how much of a draw Lesnar was for the UFC. Four of Lesnars fight came into the top 10 of most pay-per-view buys in UFC history:

So as you can see bringing back Lesnar would benefit the UFC in a big way. Love him or hate him he draws people in to watch. Those numbers would benefit the WWE as well. The common theory is that UFC fans absolutely hate pro wrestling but how do we know that? Has their ever been a poll? If UFC fans absolutely hated WWE then why was Lesnar such a draw? I think UFC fans will always be curious to see how a professional wrestler does in their sport but would they ever be curious to see how one of their own does in pro wrestling. Guys like Chael Sonnen, Rampage Jackson and Tito Ortiz have always talked about being involved or have already been involved. Ken Shamrock and Dan Severn both found success in pro wrestling and in MMA but right now no one can match Lesnars accomplishments in doing both.
WWE is not in competition with UFC and vice-versa. One is sports entertainment and the other is a contact sport. WWE is pre-determined and UFC is not. I think TNA and Bellator have the right idea with Bobby Lashley. I am personally not a big fan of Bellator but I watch to see how Lashley does. Do you see how that mentality would benefit both companies. I was always a UFC fan back in the days of Royce Gracie and before there were rules. I will however admit I paid closer attention to the UFC when Lesnar was there. I was so into the UFC and MMA I took up Brazilian Jiu-Jitsu for about a year and loved every minute of it.
It is apparent Brock Lesnar is a big name and a big draw in both WWE and UFC. With how bad the ratings are in WWE these days cross promoting with UFC might not be a bad idea. It goes back to Brock Lesnar being WWE World Heavyweight Champion and not defending the title for four months. I think fans would have a different view if Lesnar was doing stuff for UFC during his off time in WWE. However Lesnar is sitting at home doing nothing which leaves WWE without the biggest prize in the industry not being the focus of why everyone is there.  This is why Dana White and Vince McMahon need to come to some sort of an agreement to allow Lesnar to do both and become the first person to actively be involved with the UFC and WWE. Wouldn’t it be something if Brock Lesnar was WWE World Heavyweight Champion and UFC Heavyweight Champion at the same time? There is something to think about. 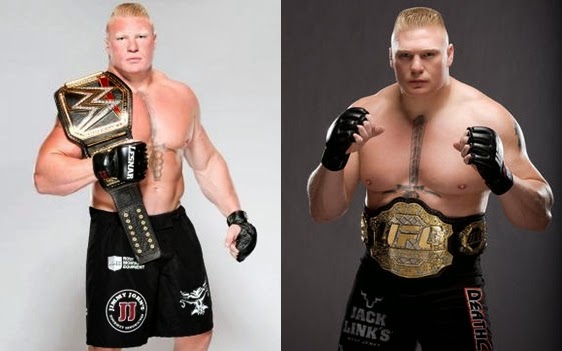