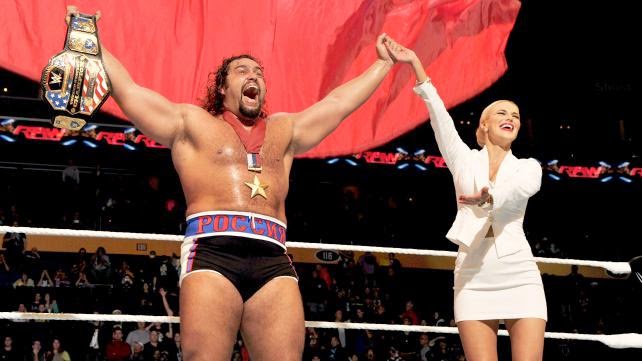 Anyone who knows my personality knows that I am a patriot at heart. Some of my favorite rivalries in pro wrestling revolved around the patriotism of the this country. Back then you had Sgt. Slaughter versus Iron Sheik, Hacksaw Jim Duggan vs. Nikolai Volkoff, and Hulk Hogan vs. Sgt. Slaughter when Sarge was an Iraqi sympathizer. You also cannot forget about when Bret Hart when anti-America in 1997. He booed in America and cheered in Canada. The patriotic feuds have always been some of the most heated and the most passionate. Lately fans have passionate again and this time it’s been towards the “Bulgarian Brute” who defends Mother Russia. His name is Rusev and he a long with his manager Lana have been spewing propaganda for months about Russia being better then the United States.
Many have tried to conquer Rusev including Jack Swagger, Mark Henry, Big E, and the Big Show. This past Monday he defeated Sheamus on the WWE Network to win the United States Title. Rusev and Lana remind me so much of Ivan Drago from Rocky 4.He killed off Apollo Creed and went to war with Rocky Balboa. I don’t agree with airing this match on the WWE Network because it was a great payoff match that should have been at Survivor Series. I do agree with putting the United States Title on Rusev because right now he’s one of the top heels and best performers on the roster.
The other reason this was a great move by WWE is because the WWE fans really have nothing to be passionate about these days. CM Punk is gone, Daniel Bryan might not return and Roman Reigns is injured. The fans are definitely passionate about their hatred for Rusev. The hatred for Rusev made Jack Swagger, Mark Henry, and Big Show relevant again. The fans really got behind each of them and wanted them to win. The fans are going to get behind whoever Rusev faces because they want to see who who is going to knock off Rusev. I personally hope it’s someone that it will help build. It does not need to be someone like John Cena or a veteran who won’t benefit from it. It needs to be someone that will skyrocket in popularity by defeating Rusev.
It remains to be seen who will defeat Rusev for the United States Title. I think it was the right move for WWE. Rusev is a monster, a beast and has one of the best in ring styles that I’ve seen in a long time. He’s a part of the future for WWE and who ever defeats him needs to be a part of the future. For now we will have to put up with Rusev crushing people but eventually someone will rise to the occasion and take back the United States Championship and the glory of America. This is a perfect storyline filled with passion and patriotism. Who will be the WWE’s Rocky and take down WWE’s Ivan Drago? Stay tuned to find out.
Please Share This