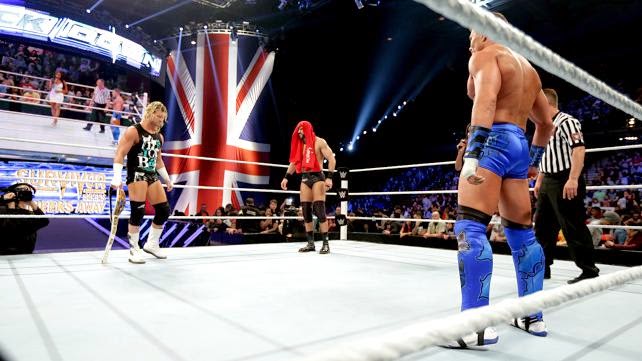 As I watched Smackdown this week I couldn’t help be overly impressed by the Triple Threat Intercontinental Championship Elimination match between Cesaro, Tyson Kidd and champion Dolph Ziggler. During this match I kept thinking to myself this is how you showcase talent. All three man are very underutilized and not given their proper due and respect. This match was definitely one of the best matches I’ve seen on TV in quite awhile. All three men had something to prove and even though there was one winner they all showcased their skills to the highest level possible.

The WWE creative staff, agents and producers need to look at this match and realize that matches like these is how you get past the Orton’s and Cena’s and build towards to the future. All three men in the match could have great futures in the WWE if given the right opportunities and showcased on a regular basis. I personally think Ziggler and Cesaro are World Championship material while Kidd could be a great Intercontinental Champion right now.  I think down the road Kidd would be a great World Champion and they could use the fact he trained in the dungeon and that his uncles and father in law were all champions in the WWE.

Dolph Ziggler has been WWE World Champion but was never given a good run as champion. He is Curt Hennig and Shawn Michaels rolled up in one. He is one of the hardest working performers that the WWE has ever had. He’s got a good look and great work ethic and has all the makings to be the WWE World Heavyweight Champion. His multiple runs as Intercontinental Champion proves he has what it takes to a main event star in the company.

Then there is my personal favorite Cesaro. Cesaro is like William Regal, Fit Finlay and Frank Gotch put together in one. Cesaro is another hard working professional wrestler. If you watched his matches in Ring of Honor you could see that he should be a main event player from the get go in WWE. Cesaro has had some great matches with Sami Zayn, Sheamus, and Ziggler throughout this past year. There’s a reason WWE made him the first Andre the Giant Memorial Battle Royal Winner. They just need to find that reason again and get him back on track.

Everyone I spoke with loved the triple threat match which is saying something because I haven’t heard that much praise for a WWE Television match in quite some time. I am glad three of the best workers in WWE had a chance to shine and hopefully they will get the chance again. Keep an eye out for Ziggler, Kidd and Cesaro because I expect more great things from each of them to come in the future.