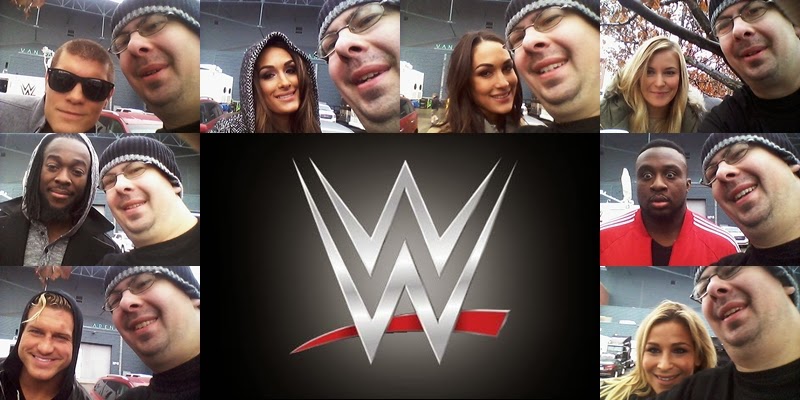 I’ve been going to live wrestling events since I was 11 years old when the first WCW Nitro came to Van Andel Arena. Back then I was just a kid and enjoyed just being at the show. Over the last five years I’ve stood by the fence behind Van Andel Arena where the loading area is and have had some great encounters. There have been other places where the encounters were not so great. Let me tell you about my first encounter in Hooters in Grand Rapids in 2008. Smackdown was in town and I ended up being locked in Hooters with 90 percent of the Smackdown roster. I didn’t want to make a scene or be disruptive but Matt Hardy was nearby and he was more then happy to take a picture with me. He was very cool and friendly about it. I always had huge amounts of respect for Matt Hardy since that day.
In 2014 guys like Cody Rhodes, Kofi Kingston, Dolph Ziggler, Kofi Kingston, Big E, Xavier Woods and Adam Rose took time out of their day to sign autographs and take pictures. Some of the Divas included Renee Young, Nattie Neidhardt, and the Bella Twins. It’s these performers that really care about the fans and take time out of their days when their schedules are crazy busy. Well all have our favorites like John Cena, Daniel Bryan, Roman Reigns, Dean Ambrose, etc. I have even my favorite which is Cesaro. Although I will root for Cesaro I will hope that performers who took time out of their day for me get the spotlight and get even more successful.
Now there is one incident that wasn’t so friendly. I was in Buffalo Wild Wings right after Smackdown was taped in Grand Rapids at Van Andel Arena. I was there with a friend and we were the only two in the place with the exception of The Uso’s, Naomi, Los Matadores, Vickie Guerrero, and Alberto Del Rio. I understand they were tired and didn’t want to be bothered but The Uso’s were just straight up jerks about the whole thing. They didn’t even want us getting a picture with Naomi when she offered. The others were nice about it and politely declined but the impression The Uso’s left on me will always standout. There’s two sides to this situation. One side that says the show is over so you shouldn’t bother them but the other side says that you got into this business to be famous so you better deal with the price of the fame you have. I’ve been on that back fence with little kids in their Uso shirts and they don’t even acknowledge it. They keep on walking like the fans aren’t there. I am guessing daddy was the same way and that’s why he never made it to heights that Austin, The Rock and Triple H did.
Like said as a wrestling fan we all have our favorites but maybe we start cheering for those who take the time and give back to everyone. I think the landscape of wrestling would change. To those stars past and present who gave me the time of day just to sign something or take a picture I want to say thank you. Your kindness is what makes me continue to want to be a wrestling fan. The entire roster can learn from you because the more people you touch the more they will want to support you. So if you are at an arena and you get pictures and autographs make you sure cheer and support those who took time out of their day for you. To the ones who walk away and don’t acknowledge you. Well they’ll eventually fade away and not have a fan base. Support the WWE stars that give back to their fans, not the ones who are shoved down your throat on TV.
If you have any encounters with any WWE, TNA, or ROH stars that you would like to share post them in the comments section below.
Please Share This