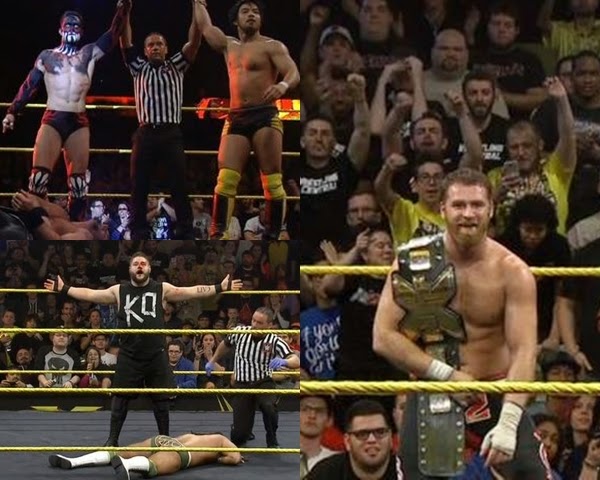 Tonight the WWE showcased another NXT special dubbed Takeover: Revolution. I can honestly say this was one of the best shows all year and I am not talking just WWE. This show matches up with any where pro wrestling is televised. The show started off with Kevin Owens who is known all over the world as Mr. Wrestling. He made his debut by crushing CJ Parker and being bloodied up in the process. I think the blood on Owens made the debut even more memorable. I am glad they are letting Owens keep his style and persona because I think the more you let talent be themselves the more successful they will be. Just ask Stone Cold Steve Austin about. Speaking of keeping personas, I loved the way Finn Balor came to the ring tonight. He came out wearing war paint like he use to in Japan. He and Hideo Itami had a great match against The Ascension.
The two things WWE lacks that NXT doesn’t is a great tag division and Divas division. The match with Itami/Balor against The Ascension and the Lucha Dragons against the Vaudevillans really stood out to me. I kept thinking about all four of these teams on the main roster and how they could ignite the tag team division. Every Diva on the roster should take notes on what Charlotte and Sasha Banks did in their match for the NXT Women’s Title. No one on the Divas division can hold a candle to what these two did in the ring. WWE needs talented women, not super models. I believe it was the first time I ever heard a “this is awesome” chant in a Divas match. That was awesome to hear in itself.
When it comes to awesome you should watch the main event of this show. Adrian Neville and Sami Zayn tore the house. It was a great match with great psychology and storytelling. Sami Zayn won the NXT Title and at the end had a huge celebration. Before the show went off the air it looked like Sami Zayn and Kevin Owens were headed to the back to celebrate some more. Well Owens made his mark and took out Zayn to end the show. For WWE fans who don’t know the history of these two go and YouTube El Generico vs. Kevin Steen. They have teamed and feuded all over the world most notably in ROH and PWG. This feud will ignite the WWE and it’s future. This will be a Wrestlemania main event someday but for now we get to enjoy it in NXT.
This is the fourth NXT special and it delivered again. The NXT show that airs every Thursday is the best product in the pro wrestling business right now. I like to call it WWE’s version of ROH. I mean look at the talent. A lot of wrestlers from ROH who have went to WWE have become very successful. Look at Seth Rollins, Daniel Bryan, Cesaro, Hideo Itami, Sami Zayn and now Kevin Owens. I believe that you will see some great things out of the top-tier NXT guys within the next few years. Triple H and his team are doing great things with NXT and it makes me look forward to the future. I tip my hat to the NXT stars who put on a great show for the true wrestling fans. The concept of NXT is definitely best for business.
Impact WrestlingLucha UndergroundNXTPro WrestlingROHTNAWWE
Please Share This